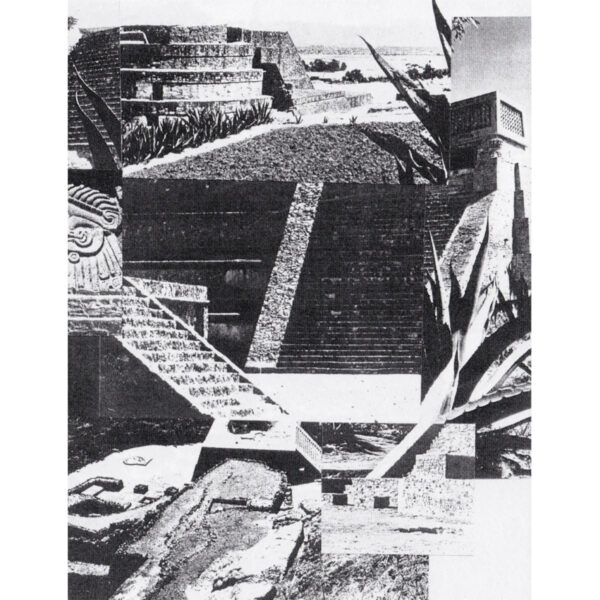 From what I have been able to find about Uaxactun, this is a mysterious project based in Belgium that so far has released two albums on the Audio.Visuals.Atmosphere. label and “Drawn on a Clay Vessel” is the more recent of the two, the other having been released back in 2017. “Drawn on a Clay Vessel” has a reverent spiritual air which many TSP readers would expect coming from an artist whose project name refers to an ancient Mayan sacred place located in a remote part of northern Guatemala near Mexico. The album cover features a collage of photographs of pre-Columbian Mesoamerican pyramids and sculptures which would suggest that spirituality and religious ritual are very much what the artist Uaxactun had in mind while recording this work.

While the album features eleven distinct tracks, and each can be heard individually, nonetheless I find it worthwhile hearing the album in its entirety from the first track onwards, to achieve that full deep and shadowy immersive effect. Across most tracks there is an air of mystery, of something complex that will yield its secrets only very slowly across decades if not centuries. The album divides into two parts with the first part appearing to concentrate on the temples and their sculptural details as a way of focusing the listener’s mind on what the sculptures may represent; and the second part dealing with the communion of the listener’s mind and awareness with the universal mind and consciousness. Accordingly the first six tracks (Part 1) have titles that refer to the details of the ritual, the sculptures, other sacred objects and their pictures and inscriptions to be meditated upon. The music on these tracks tends to be busy and quite layered so there is plenty for the mind to follow and appreciate. On Part 2, track titles suggest some sort of transformation has already taken place and the individual human spirit is being drawn upwards into the cosmos to experience communion. The music on these tracks is slower, more droning and amorphous.

The music is varied and layered enough to make for a rich and evocative listening experience with much beauty. The tape format gives a little bit of hiss but this also adds warmth to what would otherwise be quite cold and forbidding digital music. A couple of tracks, in particular “Shimmering Green Terraces”, I found a bit heavy-handed and lumpen in sound but apart from this the album is an intriguing soundscape listening experience. The production on the album is very good, striking a good balance between sharp cold tones and a warmth from the tape format. Listeners come away with a feeling of having been transported to a strange faraway universe in a spaceship cunningly disguised in the form of a remote and apparently abandoned Mayan temple in deep rainforest jungle.