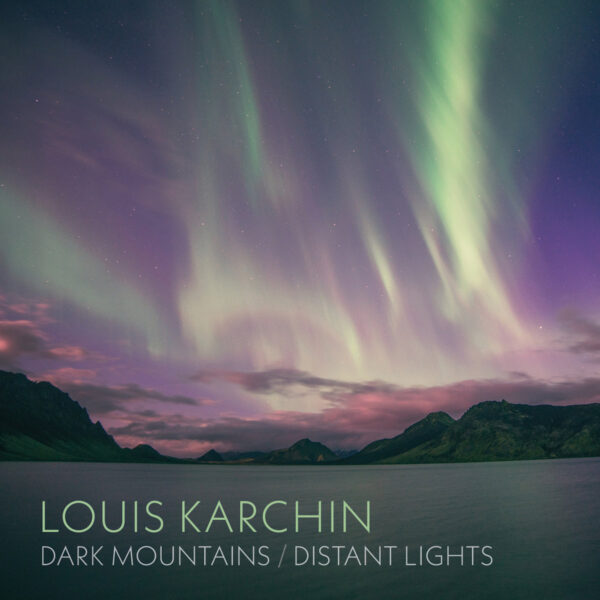 American composer Louis Karchin’s Dark Mountains / Distant Lights (NEW FOCUS RECORDINGS FCR225) is a showcase for seven recent pieces, dating as far back as 2004. They’re performed here by the trio of Miranda Cuckson (violin), Steven Beck (piano) and Jacqueline Leclair (oboe), and this small ensemble brings an intimacy to the music which is one of the album’s strong points. Karchin gets his inspiration from poetry and paintings as much as he does from nature, in particular certain places; hence the image of the Northern Lights on the cover, a phenomenon which stirs the soul of many. A very accessible record. The music contains many striking intervals, daring leaps of imagination in the way it moves boldly from one chord to the next. Karchin also has quite a melodic gift, and doesn’t appear to have been too affected adversely by the tenets of serialism. The title piece, composed in 2016, puts Cuckson in the spotlight as she turns in an assured solo performance, and it also wins points for being the most “atmospheric” piece of the set, although 2017’s ‘Reflection’ comes a close second; I’m always won over by the sound of the oboe, and in fact I wish we could hear more from Leclair on the album. From 27th March 2019. Martin Archer made Another Fantastic Individual (DISCUS 80CD) by overdubbing various wind instruments (saxes, clarinet, flute, recorder and melodica) in the studio, occasionally adding backdrops with percussion, keyboards, electronics, and computer-based sounds. This is the 80th Discus Music release, and Archer has been playing music for over 40 years, yet in all that time he’s never made a completely solo record before this. (Although he has displayed his skill for studio craft, and his multi-instrumentalist talents, many times before, for instance on 2004’s Heritage and Ringtones). Archer insists he’s remaining true to his aim of “playing AACM style saxophone”, and cites a long list of saxophone “greats” on the inside cover, players who he learned from by listening. Oddly enough this totally instrumental music – which is fascinating – doesn’t always seem like pure “jazz” to me, and often is more like a highly individual form of modern composition, perhaps not far apart from the early music of Kurt Weill in his Berlin cabaret days. In that respect, it kind of intersects with a certain period of Frank Zappa (the first side of Burnt Weeny Sandwich), and in terms of its production method, Another Fantastic Individual is not unlike another Zappa item, Uncle Meat, which contains many instances of multiple overdubbed woodwinds. Admittedly Archer doesn’t use varispeed (Zappa used it a lot in 1968), but if you like Uncle Meat you’ll almost certainly find your way into this. From 26th March 2019.

Clarinettist and sound artist David Rothenberg made the Cicada Dream Band record for Gruenrekorder in 2014 (with Pauline Oliveros and Timothy Hill); that record made use of insects and birdsong as part of its conceptual whole. A similar approach is used on Nightingale Cities (GRUENREKORDER Gruen 189), a double CD set of music recorded in Berlin and Helsinki. The nightingale is the key. Rothenberg claims this particular bird has “helped me to find the perfect sound”. He enlisted the help of various musicians and singers, plus field recording technicians, and they went out and played in the raw, creating music right there in the forests along with the song of the nightingales. The sessions have been thoroughly documented in the fat book of notes – photographs and annotations galore, meticulously detailing the circumstances of each separate track. Yet the results aren’t really that great to listen to, and there’s a rather twee vibe to the whole thing (bad poetry and much mutual self-admiration among the players), but Rothenberg may be onto something with his ideas about “interspecies music”. It’s a fairly imaginative way of engaging with the ecological debate, for one thing. From 28th March 2019.