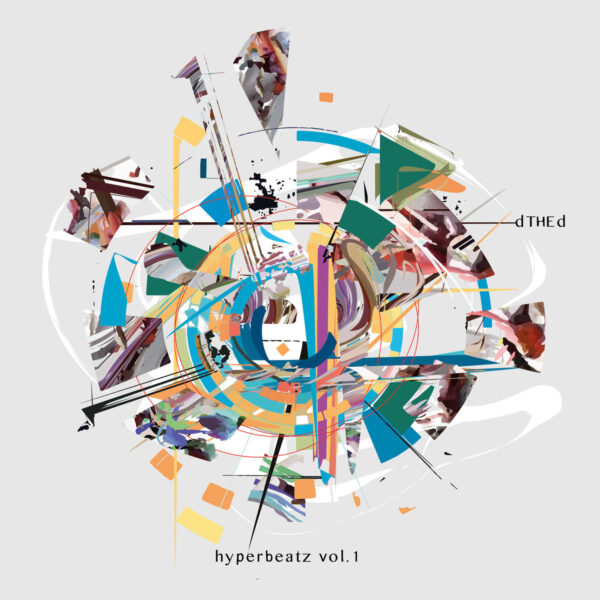 dTHEd’s Hyperbeatz Vol. 1 (BORING MACHINES bm094) is a collaboration led by Fabio Ricci, who invited Simone Lanari and Isobel Blank to comment on some of his experiments in electronica; this began what is apparently a fruitful relationship, and the three of them now work as a trio. Proof once again that it pays to advertise, or how to win friends and influence people.

This release is all totally synthetic music produced with synths, computers, and lots of drumbeats – but it’s not meant to have anything to do with dance, illbient, avant-techno or anything of that ilk. Rather, dTHEd claim inspiration from the work of Timothy Morton, a modernist philosopher who works at the “intersection of object-oriented thought and ecological studies”. Oddly enough his notion of the “hyperobject” – which is the guiding light of Fabio Ricci and his crew – came to Morton from a single by Bjork, as far back as 1996. I don’t pretend to understand any of this, but find it fairly interesting that Ricci draws ideas from the worlds of computer modelling, ecology and philosophy, rather than from conventional musical avenues.

That said, I tend to mistrust any work that claims to be undertaking “active research”; we’re invited to hear this record as evidential data within the context of an academic project, rather than a musical release. The innovative aspect, I suppose, is that dTHEd are making use of artificial intelligence to programme their machines, and the resulting chaotic spew of beats and electronic noise demonstrates something about computers having a mind of their own. Further pretentious jargon, such as “post-human diverse patterns” and “bio-musical entrainment”, is used to bolster the idea. Naturally, I was sickened and appalled when I first spun this horror. However, I’m slowly growing acclimatised to its repellent surface, and soon may start to find something of value in these disruptive, discordant tones.

The three players – whose previous endeavours may be found in Ask The White, Ant Lion, Walden Waltz, Sycamore Age, Vestfalia, Vonneumann and Routine – apparently found the collaboration extremely productive, and the eight tunes here are just a small sample of what they managed to record when they first turned on the switches in the studio and unleashed chaotic hell. They also create art prints and visuals, for use during their live sets (shudder). From 29th March 2019.