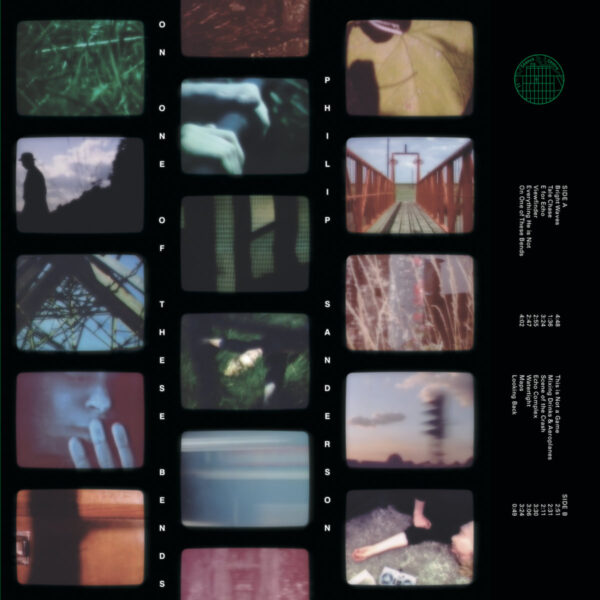 Hugely enjoyable and highly recommended vinyl release from Philip Sanderson, our good friend who recently (in 2017 at any rate) triumphed with the return of Storm Bugs with his partner Stephen Ball on the album Certified Original and Vintage Fakes. Today’s release is called On One Of These Bends (SÉANCE CENTRE 11SC), and represents a strong collection of film soundtrack pieces – and some related cassette tape tracks – realised by Sanderson from 1981 onwards. The story of it is that this happened just around the end of the Storm Bugs project, when he had been making his unique home-made DIY music for about four years, using electronics, synthis and much studio ingenuity, producing work which has since been labelled everything from “industrial” to “noise”, during what is now coming to be regarded as a unique moment in UK history, a golden era of cassette labels (like Sanderson’s Snatch Tapes) and independent talents making their dents in the culture and leaving bruises we’re still feeling today…

Philip has personally told me the story of how these 1980s sessions came to be, but I wasn’t making notes at the time and my memory is as faulty as a squid. I seem to recall something about clandestine studio time at a London University. At any rate a vibraphone was available, and that’s one of the instruments we hear. Guest appearances were also booked from Nancy Slessenger (who can also be heard on the Claire Thomas & Susan Vezey tape) and an American vocalist called Naomi extemporised a vocal on one track given only the most minimal and allusive of instructions. Ball also appeared, as did voiceover artists who added the requisite degree of detourné-BBC stylings, or inverted public information film-vibe. However, all the music was played and recorded by Sanderson working solo, adding guitars and bass to his array of synths, plus echo and other tape effects executed with his characteristic understatement.

Fans who “dig” the innovation and ingenuity of Storm Bugs won’t be disappointed by this album – Sanderson’s inventive skills are very much in evidence throughout, producing maximal results from what I assume are very simple setups. Less is more; so easy to say, so hard to do it when faced with the possibilities a studio situation offers. Such listeners may also exhibit surprise at this very “melodic” direction he took after 1981. One or two of these beautiful instrumentals might pass for post-punk material, but These Bends mostly comprises short and mysterious instrumentals, songs, and structured arrangements that any professional film scoring person should marvel at. The press notes here liken this music to Nino Rota and Henry Mancini, but might I also suggest John Carpenter’s 1980s soundtracks and, at times, the sheer audacity and cheek of Morricone at his finest is also evoked. A bold claim perhaps, but Sanderson is executing some bold music coups here. So far I’ve got a mental checklist that starts with “the best lost Library LP ever” and includes Eno, the Radiophonic Workshop, Cold Wave, and Cluster along the way. Though it’s an elusive, subjective thing, I say that Sanderson does the “Radiophonic thing” far better than any of the recent imitators (Ghost Box, A Year In The Country) and does it without even needing to exert himself.

This LP was produced by a relatively new label, Séance Centre of Canada. Label boss Brandon Hocura evidently aims to be a curator, an epicurean publisher; his mission statement is “listening for captivating sounds to rescue from the folds of time”. After only three years or so, his catalogue includes numerous releases by obscure experimenters from around the world, all of which look worthy of investigation, and with artworks usually designed by the French artist Alan Briand. No expense spared on the printing of On One Of These Bends, which includes spot-varnish as well as full-colour stills from experimental movies (no doubt including some of Sanderson’s own). I haven’t mentioned much about the cinematic aspect of this release, but the music stands up on its own; it’s certainly nothing to do with the “hair shirt” brigade of the London Film-Maker’s Co-op, which was starting to withdraw from its extremist stance by 1981 in any case. My vague understanding is that, after years of self-denial, numerical systems instead of stories, and a fierce commitment to the severe “film as film” ethic, imagery, romanticism and story-telling started to become acceptable again. One manifestation of that trend might be the work of Derek Jarman, though he never belonged to any such society. The music of Sanderson was making in the 1980s would, I suggest, have made a good fit for some of Jarman’s super-8 mm experiments. From January 2019; only four copies left for sale on the Bandcamp page, so move fast.