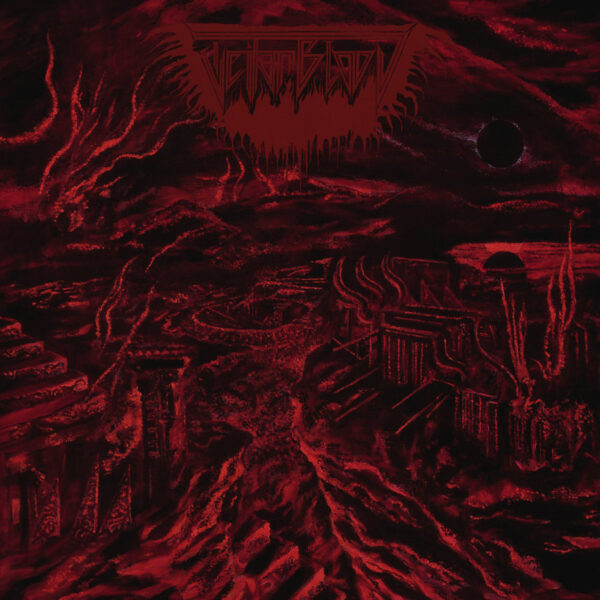 No sooner did I finish ploughing through French avant-black metallers Deathspell Omega’s 2019 album release “The Furnaces of Palingenesia” than I discovered their NoEvDia stablemates, Madrid’s Teitanblood, also have a new album out, their first in five years. Listening to “The Baneful Choir”, I see why these Spanish bottom-feeding herpetologian swamp-dwellers have the enviable reputation they do as Europe’s premier bottom-feeding herpetologian swamp-dwellers: their sound is dense and filthy, they feature lagoon lounge lizard and giant amphibian vocals and their music is a wall-to-wall barrage of demented strings-n-skins battery in which any particular string of chords that resembles a definite riff or melody seems more organic and instinctive than deliberate and rational.

After an apocalyptic ambient instrumental introduction that puts listeners in the right queasy and uneasy mood, the band drops one and all into the dense dark murky Teitanblood sonic universe of demonic tremolo guitar machinery, subterranean bass volcanic crumble, insane blast-beat percussion, sickly nauseous lead guitar solos that careen all over the joint and slimy cane-toad choirs dripping with lyrics of unspeakable Satanic evil as the amphibians battle one another in never-ending swamp territory wars. Songs really don’t exist as self-coherent individual entities but are merely vessels from which the most frightful sounds of another dimension too terrible for human comprehension are hurled into our lowly material plane of existence. As such, recommending particular songs seems rather pointless as each and every track is fully representative of the band’s style and outlook. I’d say the tracks that feature the most insanely delirious lead guitar solo outbursts (“Sunken Stars” and “Verdict of the Dead” being excellent examples) are the best. Ambient effects and the occasional all-ambient instrumental track reinforce the hellish nature of the Teitanblood universe in which deranged damnation is the normal psychological condition and all inhabitants are reduced to insane monstrosities acting and reacting purely by instinct.

Some listeners may gripe that the slower, more atmospheric interludes between and within tracks, and bookending the album as well break up its pace unnecessarily when the entire recording should be out-of-control maniacal blackened death metal fury from start to finish and nothing more. In my opinion, these nightmarish hell sections add a more sinister layer to the music, not that it really needs any more embellishment. Despite the fast pace and apparent chaos, over repeated hearings the album turns out to be quite clean in sound – most instruments can be heard clearly – and definite riffs and melodies can be heard in most songs.

The sonic punishment is really too much but for some strange reason I keep going back for more. For all the madness on “The Baneful Choir”, this recording really does have catchy riffs, the most hilariously insane guitar meanderings, the most crushing rhythms, the cheesiest swamp-monster gurgles and warblings, and above all loads of inspired musicianship. I can’t hear much that might need improving though I suppose there’s always extra room for even more insanity and brutality. Incredible stuff!