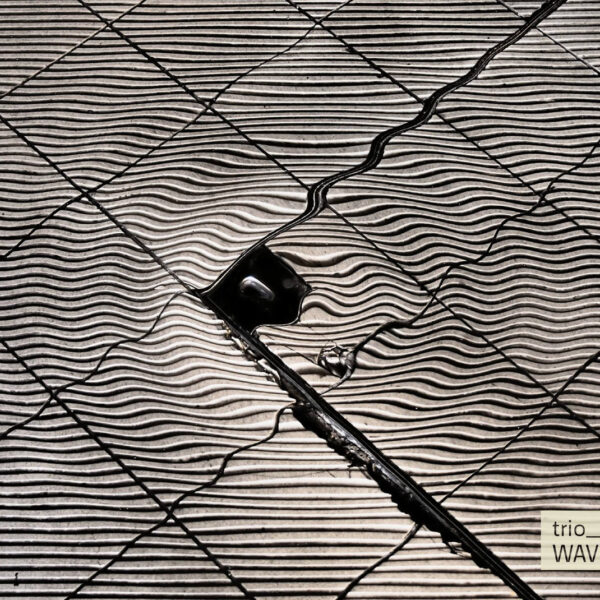 From Poland and on Bôłt Records, here’s a fabulous set by trio_io called Waves (BR 1055), containing eight examples of their craft. These three describe themselves as an “electro-acoustic trio performing a fusion of contemporary chamber music and free improvisation”, which gains them lifetime membership of whatever house of favour they wish to enter…Zofia Ilnicka on flute, Łukasz Marciniak on electric guitar and Jakub Wosik on violin, yet they sound like they’re doing the work of three times as many players. Not an unruffled surface to be had, not a space left unfilled with musical detail and incident, and no dischord or tension considered to be off-limits.

I’d like to think they’re playing a dangerous game; if not exactly juggling with sticks of TNT, then at least handling scorpions with bare hands and using them as hair-grips. Evidently keen on trying many different things, whatever clashes and stylistic mixes they can get their fingertips around; opening track ‘Waves’ is a gorgeous solidified drone of competing frequencies which sucks you in like a benign whirlpool, while ‘Breath’ is an agitated late-nighter at some joint where a fist-fight is about to break out…followed swiftly by ‘Shoal’, a deft mix of jazz chords with serial-type repetitions and strange dynamics, allowing unexpected breaks and episodes in the “narrative”. I like just about all of what I’m hearing, although my personal preference runs towards the pieces where the threesome blend together their respective voices so that individual parts melt into a morass, such as on ‘Waves’ and indeed ‘Foam’, and the sheer harmonious combination of emotions, ideas, mixed chords and patterns produces a combo with a very distinctive taste.

Also worth noting how assured all these players appear, tackling modernistic and abstract themes with supreme confidence. They come from backgrounds associated with free playing and academic classical training, and unsurprising to see lists of well-deserved international awards and prizes in their respective CVs. I’m really getting a strong “innovation” vibe from this set, players who can respect traditions (in both classical and improvised music) yet are not afraid to take risks, explore boldly, and remain true to a personal vision…refreshing, strong music…very good indeed. From 2nd April 2019.