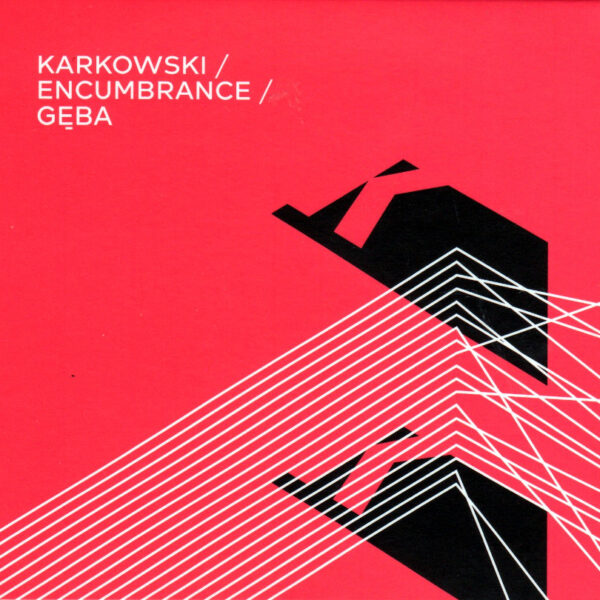 I kind of miss not hearing new releases by Zbigniew Karkowski, the Polish composer who died in 2013, even if I would usually complain about the grim and remorseless nature of his music whenever I heard it. To me it seemed he took a pretty steely view of the world and all human life, presenting his no-nonsense attitude in a near-brutal form, quite often as electronic music that was very layered, very aggressive, very busy – without ever descending into the form of a chaotic wall of noise, as favoured by the table-top and FX pedals brigade.

Well, Karkowski now appears to be gaining status as one of “the” modernist composers of Poland, at least if this release Encumbrance (BÔŁT RECORDS BR 1054 / TURNING SOUNDS 3TS) is anything to go by. Antoni Beksiak – who calls himself “Baskak” – has taken the composition ‘Encumbrance’, originally designed as electronic music, and rethought it for performance by his Gęba Vocal Ensemble. As choirmaster, he leads these seven singers through two distinct performances of the piece, both enhanced with electronic segments. This interest in “extended vocal techniques” appears to be quite a thing in Poland just now, and has been steadily growing since around 2006. Baskak speaks animatedly of “the rapid development of human beatboxing” which has been taking place in Poland at various festivals and gatherings. One of these, called the “Great Warsaw Battles”, sounds particularly steamy. While “beatboxing” is something one would tend to associate with dance music and DJ culture, what we’ve got here is pretty much a self-taught avant-garde choir, presenting the grim tones of Karkowski’s music as a long series of incessant wails and moans. The structure of the work showcases the vocal elements first, then gradually develops into episodic bursts of electronic white noise, more like the kind of aggressive and bad-tempered onslaught I normally associate with old Karkers. The record features the same piece performed twice over, with slightly different vocal ensemble members, and different electronicists credited for the electronic noise parts.

Full marks for the brilliant idea to re-think Karkowski as vocal music, but Gęba haven’t taken it far enough in my view; there’s still a certain reticence in the performance, a degree of uncertainty, which may reflect their lack of conventional training, or that Antoni Beksiak’s vision is not quite ambitious enough. Or simply that Karkowski himself is not in the room to direct things. I’m not feeling the force of it, nor the shape and direction of the work; it’s as though nobody on stage quite knows where it’s going to end up, as they advance cautiously with baby-steps. When you think what Ligeti was able to do with mixed choirs in an avant-garde context, or Penderecki’s religious works for that matter, then this material – severely lacking in drama, invention, or development – doesn’t really measure up. In its favour, the group make a plausible effort at realising the task at hand, and the sound they make is quite unusual. From 2nd April 2019.