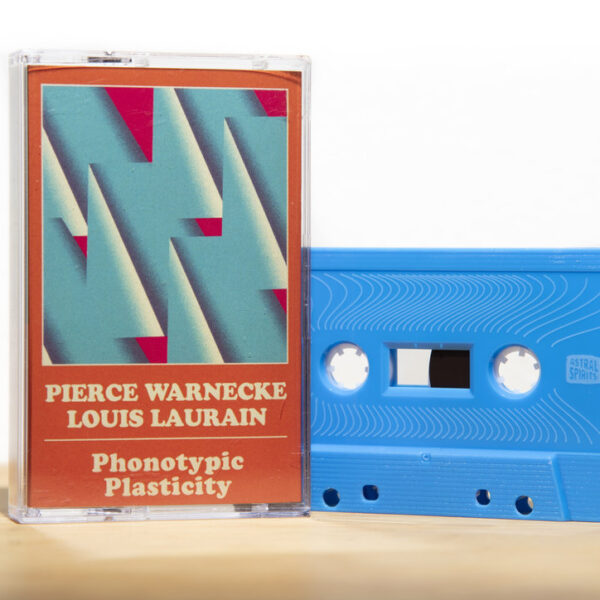 Pierce Warnecke we associate with the Berlin label Emitter Micro, often encountering him issuing puzzling and blankoid statements roughly in the area of experimental electronics, which (though restrained) aren’t so empty as to conform with “minimalist” precepts. He’s here today with Louis Laurain on a cassette called Phonotypic Plasticity (ASTRAL SPIRITS AS092 / MONOFONUS PRESS MF195), and it’s a real page-turner of scrabbly fizziness, inchoate noise, and high-pitched droney-whines. While Pierce is all electronics, Louis (the French trumpet player) does it with a cornet and objects and more electronics, but I can barely make out the presence of that brass instrument in all the bombardier ratbags flying about. Maybe he’s “treating” it, blowing it through filters.

Actually if you drill down below surface of white-powder using steel ears, you can make out that gurgling sensation that is the provenance of all fine experimental brass-puffers these days. These are five fairly short and snappy experiments which they did at La Muse En Circuit. Their working method represents their own weird take on electroacoustic music and relies on speakers and multichannel setup to give birth to myriad sonic entities. Laurain is even known to play mini speakers through his trumpet – whatever that may entail. It also turns out that Phonotypic Plasticity is a real thing. If you spoke to some geneticist who knows about DNA, they’d probably give you a ream or two of verbiage to put into your hay-baler. Living organisms are able to change their own DNA in response to an environment, apparently. This may mean a lot more than a chameleon going to lunch or a leopard changing its spots. On this tape, Pierce Warnecke and Louis Laurain do their best to capture an impression of this strange phenomenon in sound.

About near fine – a pretty good set of solid textured glorping, though sometimes wish they’d get a bit bolder and lash out with some stinging tendrils, instead of contemplating the mesmero-feedback-whiteness with blank expressions. From 17th April 2019.