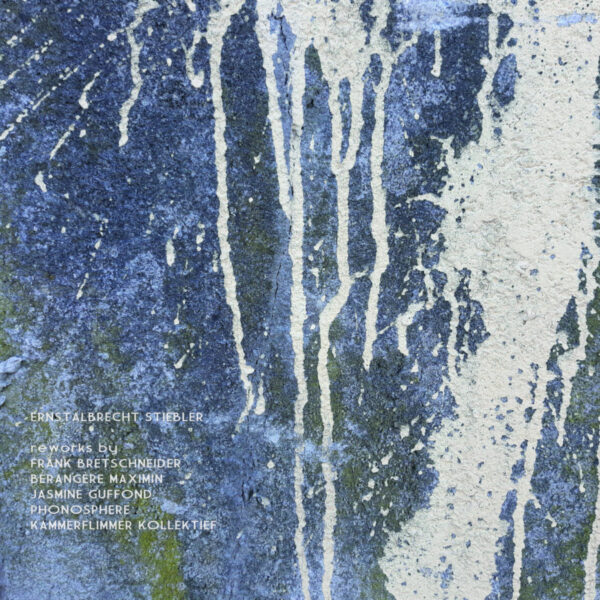 High modernist composer Ernstalbrecht Stiebler is paid homage on this album from Karl Records, which may or may not be called Reworks (KR062) … Stiebler is 85 years old and the label plans a series of releases to honour this great man. It’s to my chagrin that I’ve never heard of this man nor heard a note of his music, but it seems few have outside of a small circle of “connoisseurs”; he’s evidently a minimalist, a prize-winning composer, and regarded as a “pioneer” of his particular form of reduced music. Plus he’s been a musical director for a goodly chunk of years at the Hessicher Rundfunk.

Well, you won’t exactly hear his own compositions on this set, rather you’ll get five interpretations or “approaches” from Frank Bretschneider, Bérangère Maximin, Jasmine Guffond, Phonosphere, and the Kammerflimmer Kollektief. It’s all really rather good. Right there you’ve got an interesting mix of contemporary electronica maestros, electro-acoustic composition, and contemporary chamber music in the room. Further, it’s not “populist”, trying to bring a new audience to what might otherwise be considered difficult or austere music. I especially like ‘Innocence’ by Bérangère Maximin. This French genius is rooted in solid electro-acoustic traditions and is capable of a stern and unyielding tone in her work, which she exhibits here to good effect. If Stiebler really is about repetition and sound-based music, he should be delighted with these layered corridors of pulsating gigantisms…the whole construction appears to be made of icy-cold steel, yet Maximin imbues the imaginary space with a good deal of open-endedness, pathways and gangways that may lead us to a little white opening out of thought.

Phonosphere is excellent too. This might be a pairing of Werner Durand with Jens Strüver and their piece ‘Mit der Zeit in Atem Schwebend’ is less electronic, more bowed strings (it sounds like) mixed with other foreign elements, despite fact that Durand is a puffing man who has made a career out of producing long-form monumental works with his fine plastic tubes. With this Atem Schwebend affair, I’m getting a slightly sinister vibe and am prepared to imagine a mental portrait of Ernstalbrecht Stiebler as a somewhat implacable, stern fellow dressed in a grey suit, staring at us like a basilisk. On the other hand, Durand and Strüver aren’t so keen on repetitions as they are sustaining a powerful atmosphere with no root note that we can discern, so total effect is like floating on a dank cloud of globby mercury or such. So far, both light and heavy…these players may be on to something with their semi-alchemical dealings…

Australian Jasmine Guffond not heard much in these quarters at all, apart from her contribution to that Karl Marx compilation thing (on this label). Not finding much air or light in her ‘Remix Algorithm’ – which resembles a sequencer or computer chip having a very bad day. She did it with a MaxMSP patch, which may account for why the balance is in favour of code and routines rather than human interventions, but I guess I gotta admit this has an internal logic that won’t quit. And good to see gender balance on comps like this (two women composers). The Kammerflimmer Kollektief loonsters come to us courtesy of Thomas Weber. Based on 2015 album Nicht Sterben. Aufpassen I still find them an acquired taste. Their ‘Moredo’ thing here features bass, synth and drumming and resembles a ghastly 1980s techno-sci-fi soundtrack and feels really out of place here. Apparently however it is based on a recording of Ernstalbrecht Stiebler himself, performed by the Bozzini Quartet. You would hardly know it, so intrusive are Weber’s interventions and “expansions”.

So this leaves us with the excellent Frank Bretschneider, loved by millions, co-founder of the Raster-Noton label and a past master of clipped, rigid glitch-electro scalpel music that you could use to pave a concrete garden. His ‘Re-Mitteltoene’ is directly inspired by a Stiebler piece, and you can really sense both these German powerhouses going at it in their quest to “nail down” this elusive middle-tone, a quality prized by many. Quiet, slow, but incredibly insistent; if repetition is a corner-stone of Stiebler’s work, I hope it’s all as unpredictable as this. Bretschneider taps home his points with the patience and care of a silversmith working with tiny hammers. Kinda makes the repetitions of Glass and Reich seem a bit stolid and ordinary in comparison, but I don’t suppose that’s the point.

Despite one or two sour notes, this turns out to be a pretty solid set of trouncers and we hope to hear others in the Stiebler series in future. From 08 May 2019.