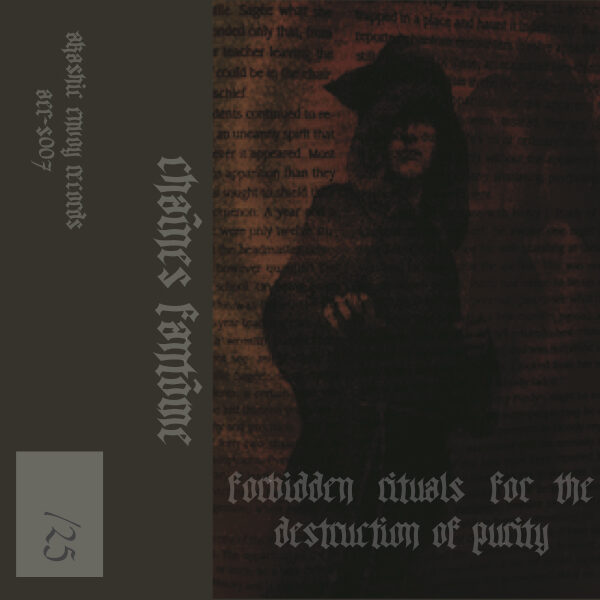 So obscure is this mighty horde of … well, one member, Diabhal Gormbhrúite … that it has no presence on Facebook or Bandcamp, the US-based Chaînes Fantôme (exactly whereabouts in the US, no-one yet knows) has seen fit to drop off its first release with Akashic Envoy Records. At this time of writing only 25 copies of CF’s debut exist and they may have all gone already. But despair not, for those insiders who grabbed the copies and heard them were probably sucked dry by the raw BM psychic predation of the music and perhaps those copies are now being traded around various sites by terrified relatives of those very dehydrated and deceased owners, wanting nothing more than to just get rid of them, even if they have to pass them on to new victims to rid themselves of the music’s evil curse. As Diabhal himself warns: “… This music represents a way to feed from the innocent and prey on the weak. Complete sociopathy through psychic vampirism. Complete decadence through self-indulgence. To tear the throat from the lamb and indulge completely in any vice that one may desire. No remorse. No emotions. Only lavishness and degeneracy …”  How’s that for self-promotion?

With eleven tracks numbering from DCLXVI to DCLV (666 to 655, going backwards in Latin numbers), the recording is a noisy bloc of steaming filthy raw BM, all solid whirling guitar noise and feedback dust and grit, through which demon spirits whisper incantations intended to hypnotise listeners and keep them entranced while their life-force is drained from them. For all the dense clouds of roaring grit scratching the ear drums, riffs and melodies do make their presence felt strongly, and an atmosphere of melancholy, pain and despair pervades the songs. This is hardly the stuff you’d expect of a recording hellbent on sucking the life out of living beings for the sheer vicious joy of it without any remorse or compassion for the victims’ suffering. Instead, the beings within the storm of guitar roar and grit seem like the ones opening their throats and bodies to let fly the decay and desecration that have tormented these creatures for countless aeons.

Beneath the noise and torment, there is surprisingly good music with distinctive riffs and melodies, and changes of key that help to impress the riffing and songs strongly in the mind. The percussion is not always very strong and the music does suffer a loss of power as a result. The harsh tones and the painful emotions behind them do not make for easy listening but those who are prepared to hear this music all the way to its bleak and tormented end may come away feeling pity for the demons trapped in a never-ending storm of chaos and ruin.