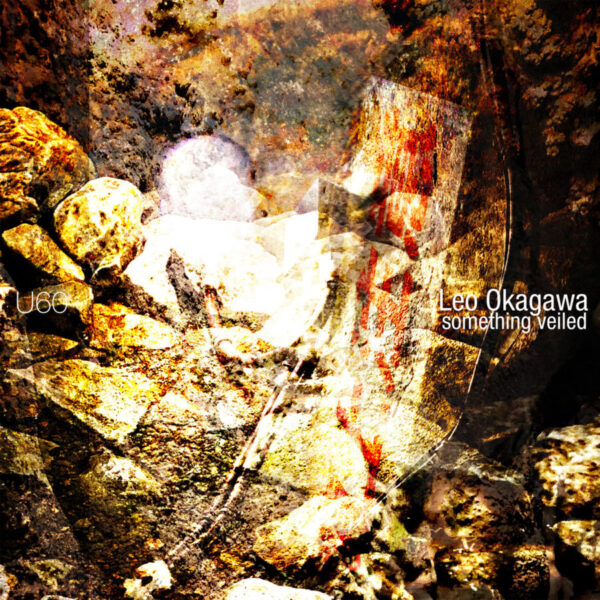 Some artists go to quite extraordinary lengths to create soundscape art. The sounds on “Something veiled” were collected by Leo Okagawa on field trips into Abukuma and Irimizu limestone caves in the Abukuma Highlands area in Fukushima district north of Tokyo. He apparently went very deep into these caves to record such sounds as water dripping off stalactites and echoes reverberating through rock corridors; he even recorded the sounds his feet made while he was travelling and the sounds made by his equipment as he was setting it up. Later, back in the real world, Okagawa used equalisation and editing to tease out deep lower frequencies from recordings and the result is a work that goes beyond the source material and its world and becomes a dynamic, restless being whose origins can still be discerned as nature-based but whose essence and purpose might well extend across time and space. Recordings of water dripping, flowing or roaring certainly set up a humid, even damp environment that demands the listener’s attention and draws it to the restless spirits that might inhabit such a steaming world. Imagine that a few quiet drops of water can hold a listener spellbound as they plonk into a stream, the same listener not caring two hoots if just down the hallway at the same time the bathtub was overflowing with running water from a tap. This recording really is that intriguing.

While the album does have its quiet moments – and those moments are sometimes long, or feel longer than they actually are – there is considerable tension underlying those periods, as if at any moment a stalactite may break from the ceiling and fall, hitting the bottom hard and the sound of the crash reverberating throughout the cave system. The soundtrack is constantly busy, whirring or clicking away even during the quietest parts. At the same time though, the music’s mood, while not bubbly, is never less than calm and serene. Where that music is journeying too so confidently and insistently – it is focused on reaching a destination – I don’t have a clue. The most important aspect of that journey though is how the music motivates you, what aspect of it pushes you to keep going. You will eventually achieve or discover something that hitherto was hidden from all humanity and would have remained secret, but which opens up a treasure chest of possibilities and self-discovery only to those who take the risk to go on the journey in the first place.