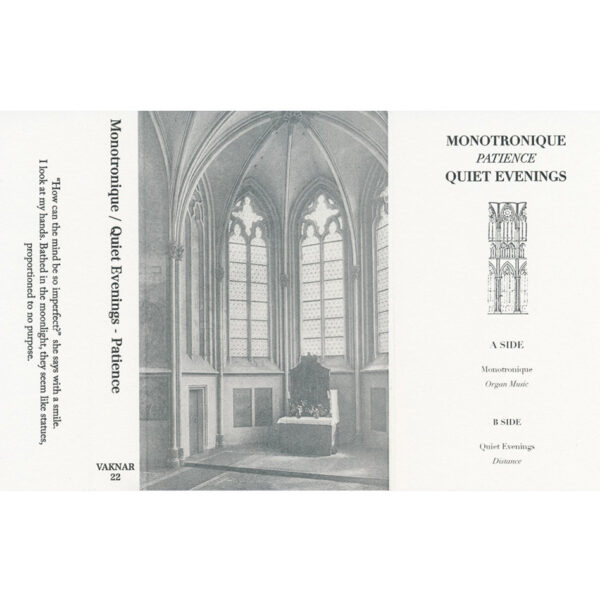 Appearing on quite a few people’s bandcamp collections, this modest cassette featuring two 20-minute instrumental recordings actually doesn’t require much patience to sit through it; it only requires that you be in the right frame of mind to hear it, and that would be a mind so beset by the stresses of daily life that calm droning ambient music with gentle tones that change gradually, almost imperceptibly, is needed to settle and soothe it. The first track “Organ Music” by Monotronique, comes slowly and steadily from the shadows with quiet fragile and plaintive organ tones. So soft are these tones, and so fragmented the melody they form seems, that you involuntarily start concentrating on them, and whatever was bothering you earlier slips away. The atmosphere surrounding this track is very still as well, almost holding its breath (if it were a living creature), as the music delicately yet resolutely enters and fills your head. The music becomes slightly firmer in its sounds and direction in its second half with an undertone drone. By contrast, “Distance” from Quiet Evenings is already definite in its form, sound and mood when it starts: it then stretches out languidly as if about to rest and watch the world go by with half-sleepy eyes. Performed on cello and other stringed instruments, this track has rich if occasionally wavering and even shrill tones. The music invites quiet contemplation and is almost spiritual in its nature. In its later moments, an unsettled spirit enters the music and the music can appear dark and ambivalent.

While the Monotronique track probably can’t hold listener attention for much longer than 20 minutes, due to its limited range of sounds and its very minimal presentation, the Quiet Evenings piece probably could have gone on for a little longer with its quivering, sometimes seesawing tones. The cello seems quite underused though every time it appears in the music, the mood changes to something a bit wintry with a sea-salty flavour. By the end of the tape, your mind should feel clear, having travelled through various soundscapes that offer a range of moods and textured sounds.

Monotronique is the name of Ukrainian musician Roman Kurhan’s electronic dance / techno project and Quiet Evenings is an American duo of Grant and Rachel Evans who also have had their own solo projects (Motion Sickness of Time Travel and Nova Scotian Arms respectively).