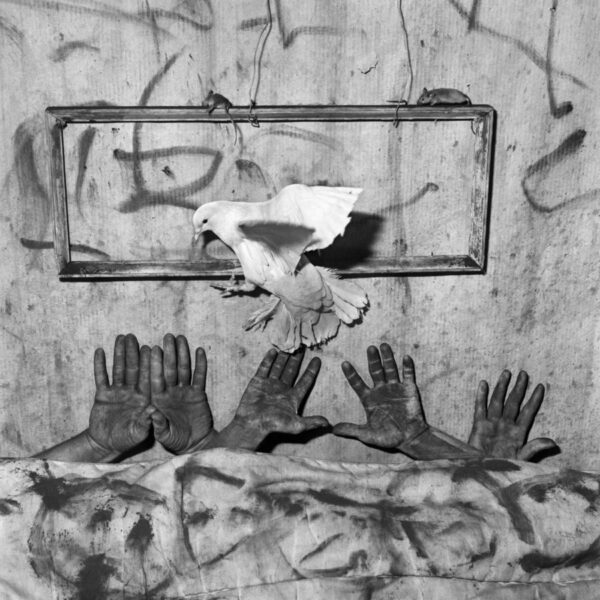 In May 2019 we received a generous package of releases by Scarcity Of Tanks (SOT), the Cleveland band featuring guitarist Dave Cintron and led by the founder, lead vocalist and all-round personality Matt Wascovich. Technically the entire package is “back catalogue”, but I will relax the usual TSP rule about this as we like the band and frankly it costs a lot of simoleons to ship physical product from the USA to the UK these days.

Garford Mute (TOTAL LIFE SOCIETY TLS008) from 2017 is the band’s eighth album. They also released it as a double LP on vinyl and sent me that too. Gotta dig the grey and gloomy cover art by Roger Ballen. Open hands, figures hidden behind a curtain, a frame without a picture, a flying dove…this image is replete with symbolic meaning. Garford Mute is notable for featuring a small army of players, including some major players – members of Pere Ubu, Minutemen, The Stooges, Guided By Voices and Bren’t Lewiis Ensemble are all here. SOT formed a Pere Ubu connection long ago, have toured with them, and have charmed original members Scott Krauss and Tom Herman into their projects…still the album has a very guitar-heavy sound as most of the army are axemen, and the only thing to leaven the overall mix is the occasional toot from Steve Mackay’s saxophone and electronics from Gnarlos. A quick scan of the track credits indicates an allocation of at least two guitar players per cut, sometimes as many as three or four! Everyone concerned rocks overtime with the insistent, chugging rhythms that the Tanks have made all their own. I see on the press release Matt thinks of his baby as “a psychedelic rock band”, but my pigeon-holing tends to lead more to the hardcore-punk thing…they have the same kind of sluggish negative energy I always enjoyed on Flipper records, for instance. It’s also worth pointing out that nobody really takes “solos” in the conventional sense, and the songs tend to emerge as a polyphonic morass of several guitars and basses all playing their lines at once, the better to match Matt W’s lyrical outpourings, which for the most part tend to refuse conventional verse-chorus structure. Anger, energy, blocked emotions, expressive howls…everything is seething and boiling in the constrictive melting pot of this Garford Mute. A heavy item. Related item in the package is by Hidden Rifles, a 2017 album called Across The Neighbourhoods (TOTAL LIFE SOCIETY TLS009). Same label, same Cleveland connections, another supergroup of name players – though a smaller band this time. Mark Shippy, Jim Sykes, and Matthew Wascovich are joined by Mike Watt of Minutemen and Norman Westberg, hard-working guitarist from Swans. Another guitar-heavy record, it must be said, but I sense that Hidden Rifles is the project Matt W turns to when he wishes to let free his avant-rock side. The band might not be as all-out discordant as Pere Ubu, nor as given to wild dynamics, but the combo can turn in some unsettling angsty urban noises when the song calls for it, such as at the start of ‘Paranoid Unsaid’ – a good instance of a psychotic episode rendered on sliding guitar strings. On the title track, Matt’s penchant for declaimed rather than sung vocals reaches some kind of apogee, and he combines his urgent rap with a dangerously slow drawl that just exudes sheer menace. Come to that, there’s sleazy menace creeping all over this record, but we could single out ‘Subway’ as one example of a horrific descent into a past-midnight scenario where a beating-up situation is pretty imminent, suggested vividly by the nasty reverb guitar riff that swings like a thug holding a bicycle chain.

Hinge (TLS010) by Scarcity Of Tanks is from 2018, the most up-to-date item here – and their latest, at time of writing (though we’re advised to look out for Dissing The Reduction, their planned 2019 release). Here the Tanks lineup is quite different to the guitar-squad from Garford Mute: Doug Gillard, Don Goodwin, Nate Schelbe and Michael Yonkers are the core band joining Matt W on his quest to spread the truth, but don’t except a “minimal” record – the preferred formula still leans towards a crowded sound, lots of guitars, and an insistence on pounding every point home with strident drumming attacks. However, some tracks step out of this mould – ‘Ride The Ridge’ for some reason feels like something REM might have recorded in 1983, while ‘Walking On The Earth’ makes a good fist of experimenting with the band dynamic by introducing a vicious “choppy” rhythm that requires the guitarists to think on their feet. ‘I Don’t Want To See You’ is an instance of how the SOT “formless” mode can be made to work to great advantage – any pretence at song structure is abandoned in favour of a gloomy, endless rant, the musicians having to follow the singer down a very dark tunnel. Pound for pound, there’s more variety in the song form and the sonics here than on the double LP, which is all of apiece – each song is clearly about something different, and even the booklet underscores this fact with its assorted photos of loneliness and suburban decay printed behind the lyrics. The five piece works well as a unit, though I will single out the electronic additions of Michael Yonkers – he adds that touch of malign crackling noise the like of which we haven’t heard since Mission Of Burma. Chris Yarmock did the cover painting.