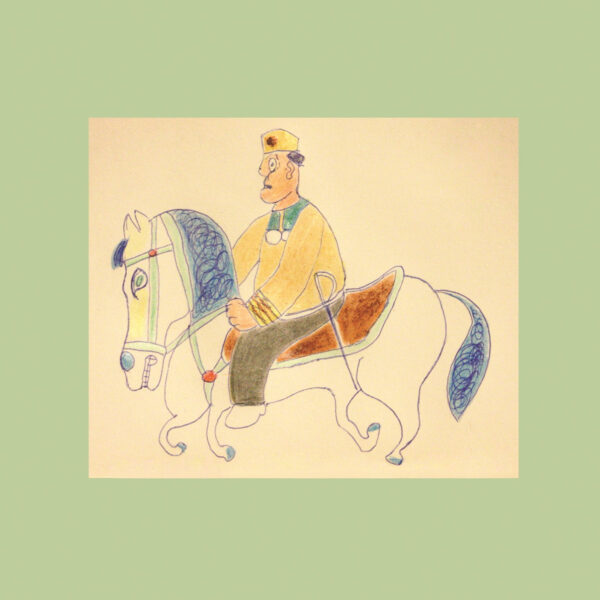 New solo CDR from Ezio Piermattei, the Italian creator whose work is hard to categorise but is always for us characterised by a certain eccentric charm, a benign fractured genius of some sort…he wowed us years ago with his bizarre forays into something resembling improvisation (though the work may have involved tape manipulation as well) with releases under the aliases Hum Of Gnats, Poisucevamachenille, and Autopugno, but that was then. Under his own name he made the always-surprising Turismo Dentale, a record where his gift for unexpected tape edits and elisions was put to the test, to say nothing of his selection of unusual source materials.

Today’s record Gran Trotto (CHOCOLATE MONK choc.424) might be closest to that 2014 item in spirit, but it’s very hard to say. Ezio credits himself with tapes and field recordings, but also a few musical instruments (piano, organ, bells, objects), and proceeds to list on the back cover a number of places where he gathered his recordings. He’s a travelling fellow, that’s for sure. Gran Trotto is evidently his version of the “grand tour”, which was the thing that any well-to-do young gentleman or lady was expected to do in the 17th-18th centuries to complete their education – soak up the culture, art and ideas from mainland Europe by visiting all the major cities. It might be significant that many of these grand tours usually ended up in the boot of Italy. At one level Ezio’s record is a “diary” document of his visits, and it’s always interesting to discover what details in the environment mean something to him. Granted, there are things like train travel, church bells, and open-air street meetings, but while these can be commonplaces in the phonography genre, they come to life under Ezio’s selection and editing methods. To put it more plainly, it’s never clear where we’re going or what lies ahead, but one surprising event unfolds after another.

There’s also a fair amount of spoken word (mostly in Italian I think), and at times one feels one is enjoying the ideal holiday in the company of long-lost relatives (who just happen to have been born in another country). Ezio has always been quite attached to the sound of the human voice, I think, and is genuinely interested I would hope in what people have to say (or sometimes sing), rather than some who just treat the voice as one more sound element. Or those cold-hearted modern musicians who try and eradicate the human presence from their field recordings completely; and there are plenty of those, who evidently wish to turn the vibrant and vital world into a mausoleum just for their own narrow aesthetic purpose. Ezio Piermattei is not such a one, and embraces all the juice and messiness of life with the enthused warmth of a genuine human being. I’ve also got a note to myself to consider the very pastoral nature of the whole set…there are no modern sounds (like mobile phones, computers, cars) anywhere on the record, and Gran Trotto could almost be an aural snapshot of the 19th century countryside.

Released on Chocolate Monk, that label dedicated to unusual records of all stripe; I see they’ve upped their production values lately, as the insert is full colour printing on both sides of good quality card. Charming drawings both inside and out presumably by Piermattei; the horseman on the cover has a look of bemused wonder which is just priceless, while his horse has a slightly demented gleam in his eye. From 11 June 2019.