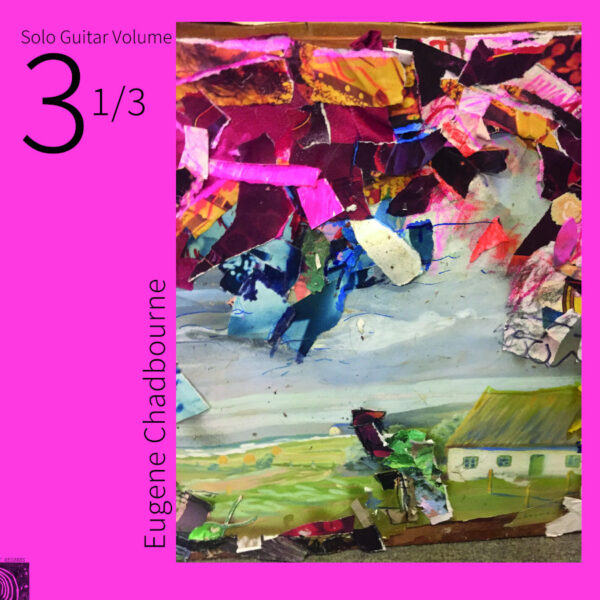 Very grateful for a chance to hear these early recordings of Eugene Chadbourne…we’ve long been fans of the Euge ever since we first heard a Shockabilly album and embarked on investigating his unpredictable solo career in the late 1980s, with a string of unusual records for Fundamental and other labels. Chadbourne sometimes liked to project this “zany” persona, especially on stage, which might have thrown people off the scent as to his remarkable musical prowess, deep knowledge of jazz, and his very personal approach to free improvisation. He seems to have started his Parachute label in the 1970s after learning about the Incus label and what Derek Bailey et al were doing in the UK. Parachute was home to Polly Bradfield, John Zorn, Henry Kaiser, and a few others, but was mostly a showcase for Eugene solo.

I always wanted a chance to hear Eugene’s first two Solo Acoustic Guitar records, and wasn’t disappointed when I mail-ordered CDR copies of these from House Of Chadula (a service he personally ran from his home address, which might now be extinct – not sure). I mention this as these Feeding Tube releases – not reissues – continue the naming scheme to some extent. To think there are four of these LPs! Well, Solo Guitar Volume 3 1/3 (FEEDING TUBE RECORDS FTR395) was made at some unknown period in the 1970s when Chadbourne had gone to Canada to escape the draft, and contains seven solo excursions made during that time. It’s astonishing stuff. This was all made with guitars? Probably not, knowing Chadbourne’s predilection for playing pieces of junk and mangling the sound of his own instrument in ways that surpass the stuffy academic idea of a “prepared” piano (this strain of wild experimentation would lead to the crowd-pleasing antics of the electric rake and the electric birdcage). Anyone who just likes the sound of atonal, non-specific free improvised guitar with lots of non-natural noise will find this one a real golden gobbet from the skies. On the other hand, already we can hear traces of his try-everything approach to mixing up musical styles, and fleeting fractured moments of jazz, country and western, and psychedelic music can be found in this forest of delights, if you just listen hard enough.

Yet it isn’t to say he was a fully-formed Athena springing from the twin heads of Hank Williams and Derek Bailey by this point, as there’s a certain hesitancy in the playing, an exploratory frame of mind, which makes this all the more fascinating. Later on his music would become breathless and cluttered; here there are still chances to pause for breath, trying out things that don’t quite work, and no matter how ungainly or awkward the results may be, he lets them stand. Personally, I lap it up. My favourite track here is the long one (11:18), ‘Superman’s Problem’, which the experts say is likely to date from 1979. Excellent! From 27 June 2019.