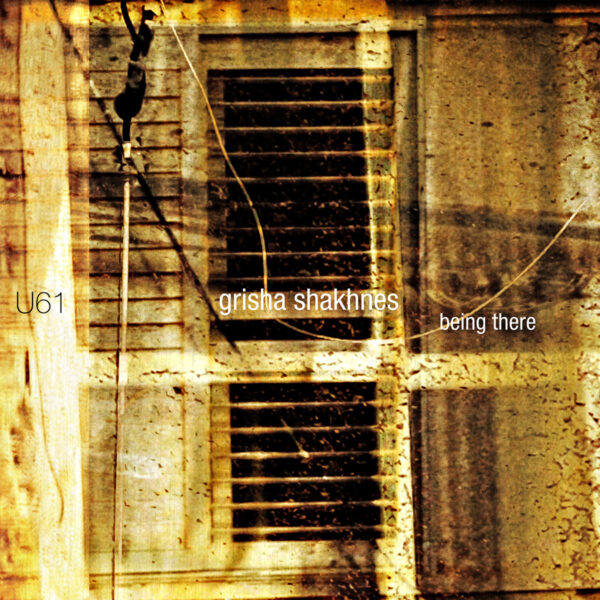 Israeli artist Grisha Shakhnes is blunt about this release: it’s a field recording and moreover a field recording of himself recording music at home in his room amid a background of sounds and noises from the street outside his home in Tel Aviv. “Being there” captures something of Shakhnes’ working environment, the methods he uses to make field recordings and the raw material in those recordings. As Shakhnes admits, “Being there” brings the listener into that environment and immerses the listener in there, almost seeing, hearing, feeling and experiencing the life that Shakhnes experiences daily. The recording reduces some of the distance that exists between musicians and their listeners on music that listeners experience second-hand, rather than in a live environment. Above all, “Being there” is a brave endeavour on Shakhnes’ part to reach out to listeners and invite them into his world, to deepen the connection that Shakhnes first made by recording music and which listeners complete by choosing to listen to his music over other musicans’ work.

The recording itself sounds much more structured and coherent than you’d expect it to. The first track in particular, quiet though it is, and consisting of an ongoing scratchy whirring drone that occasionally develops wobbles, is possessed of single-minded intensity. Things may go bump during the course of the track but it continues to drive down its intended path. It does seem to reach its destination in the end. The second track is a much longer piece lasting some 43 minutes and is a much more complex entity. It scrabbles quite a lot, there seem to be interruptions, and background noises and voices intrude, but the track stubbornly maintains its focus and direction. Where it’s going, we don’t know but there’s something compelling about the attention to detail and minutiae in the track that takes us along for the ride. I would say this is the genius of a recording such as this, that the attempt to reach out to listeners and to reduce some of the distance between the artist and the audience is achieved by drawing the audience into the artist’s world and setting them at the same level as the artist, following as fellow equals the artist in the work of creation. The risk involved – that the audience might see the artist with all the same faults and frailties they have, rather than as some semi-divine messenger they had also believed, fail to appreciate what the artist is trying to do, and fail to respect the artist as a fellow human – may be great.

Overall this is a very solid and highly immersive recording. You just have to be there.