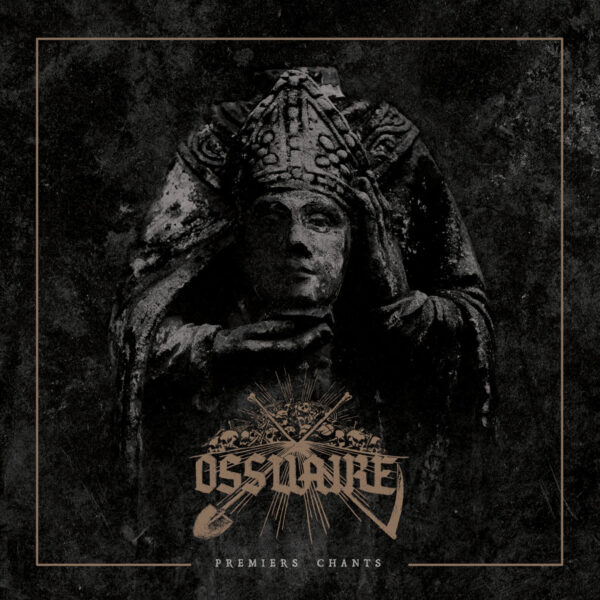 Having formed in Montreal in 2016, Ossuaire was initially one of many young ambitious bands in the Métal Noir Québécois scene with an EP “La diatribe infernale” to its name. In 2018, the original Ossuaire trio took their career to another level by adding bassist Sovannak Ké (a veteran of various other metal and punk bands in Montreal) and signed to Sepulchral Productions. “Premiers Chants” is the ambitious first of two concept albums detailing the degeneration and fall of Christianity; the second album “Derniers Chants” came out later in 2019.

Given that a million and one bands have already trodden the melodic raw black metal path of condemning institutional Christianity and its hypocrisy and corruption, one can hardly expect Ossuaire to bring something that hasn’t already been done in Canada and elsewhere, without radically changing the music and taking the band away from its black metal foundations. What the band can offer is a fresh reminder of why black metal continues to attract audiences well into its fourth decade with much the same restricted format of minimal instrumentation with an emphasis on a distorted guitar sound created by tremolo picking, raw lo-fi production, unorthodox song composition structures not relying on verses and choruses, and cold, intimidating atmosphere. Everyone is striving to find the one true path that is Black Metal, and in the process discovering that for each and every individual, that path is particular and unique yet more or less representative of all paths leading to the goal and what it represents for its seekers. The path that Ossuaire takes on “Premiers Chants” then, and from that point on, will be that band’s own particular journey to discover the essence of the music and its themes.

Admittedly the band gets off to an ill-advised start with two very similar sounding tracks in the introductory title piece and its follow-up “La Procession des Flagellants” which could have been Part II musically if not lyrically. Both are tinny and brittle with more flaying of percussion than of actual penitents birching themselves with thorny branches or leather straps, and have the air of the band letting off excess steam and warming up for later and more beefed-up songs. The overlong choral singing loop has a kitsch feel to it. Track 3 comes and goes in a different key and with a different set of riffs – all songs on the album are heavily riff-based – but I’m starting to find myself questioning the band’s wisdom in signing up to a big black metal label without having a definite style and identity all its own, apart from drawing inspiration from other melodic BM bands with a raw sound, and song-writing skills limited to repeating big motifs ad nauseam. Evidently though Sepulchral Productions have seen in Ossuaire what I’ve failed to mention so far: that these guys have plenty of aggression and passion for their music, and play as a fairly tight (though not too tight) unit.

It’s with the quiet interlude “Exhortation”, with the acoustic guitar melody and the sonorous recitation that the Ossuaire musicians lift their game and start delivering a more powerful and forceful style: it’s still raw and riff-based, but now the music is steady and restrained, and by that restraint gives the impression of being much stronger and heavier than it actually is. The singing is now blood-curdling and the vocalist savours every lyric as though he is delivering a warning behind what he sings – which may very well be the case. “Saints Céphalophores” (referring to Catholic cults of beheaded saints who carry their heads in their hands) combines a slow-paced looping riff with thrashier sections, pointing to a more considered song-writing approach. “La grand apostasie”, intended as the most important track on the album, is an epic piece of raw melancholy pathos in parts, virtuoso musicianship and singing that verges on the tragic. The musicians really hit their stride as a collective playing intense aggressive instrumental music which almost starts to sing on its own. The orchestral coda spoils the song with over-earnest heaviness and the Ossuaire guys would have been well advised to have left it out.

The second half of the album is far better than the first half and perhaps Ossuaire either could have worked more on the first three songs to make them more individual or structured them differently. I can hear something of what might have prompted Sepulchral Productions to pick up the band at such an early stage in its career: a passion, a fierce and single-minded determination to say whatever important message the band has to say with force, energy and emotion. Perhaps at a later time in their career, when enough distance has accumulated between them and the recording, Ossuaire might choose to revisit this album and recraft it in the way it should have been done – with the power and fire burning throughout.