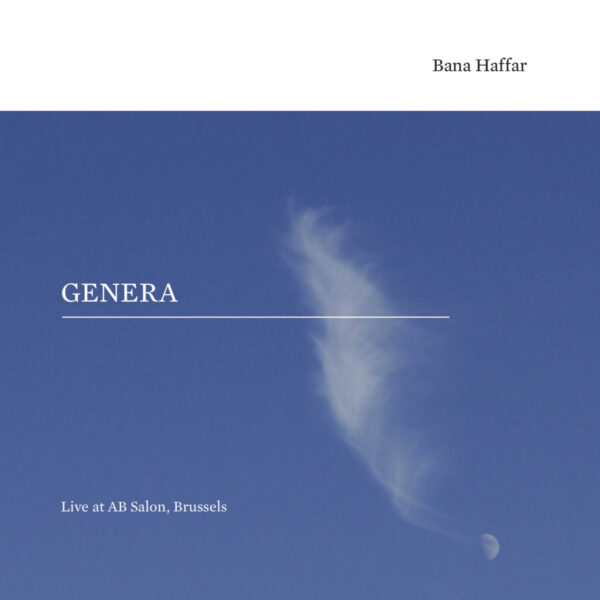 Very taken with Genera, Live at AB Salon Brussels (TOUCH TONE 71) by Bana Haffar, new CD on Touch and one which bears all the hallmarks that have made this label unique and distinctive, including on this occasion the not-overlong duration (32:43 mins of music, and not a wasted moment). I mean Touch have been a home to enigmatic and beautiful music that transcended its electronic mode of construction, as Bana Haffar does here with elegance and intuition, feeling her way around the contours of this work and sustaining interest right until the end.

She is Arabian born and now living in America, and may have found her way towards electronic music from a more traditional classical training base, including learning the violin and playing the electric bass for ten years. She indicates that her present way of working is an attempt to “unlearn” all of this, which she now regards as a sort of institutionalisation, the same way that intellectuals and free thinkers rebel against the confines of a traditional education. Everyone who picks up these synth instruments and related tools declares they are now going to start “exploring” and announce their interest in “new forms”, but Bana Haffar actually makes good on these promises. She lists a range of modular devices that sit in her rack, doing so with the kind of precision you normally get from a salesman in the showroom, as well as noting her use of cassette recorders, field recordings, and microphones; and then proceeds to instantly move beyond this array of equipment to produce beautiful and fascinating music. Her ideas never seem to dry up and she never settles for a commonplace sound.

If you want a few signposts, you might say she combines the best of imaginative Mego-glitch of the 1990s with Terry Riley’s arpeggiated sublimeness, juxtaposing these elements with her audio snapshots that inject grit, realism, and surprising angles on the world around us. As noted earlier, it feels to me like she does all of this on 90% pure instinct, shaping up the instant composition in both hands as it unfolds and proceeds. Unequivocal recommendation for this excellent release…now I want to hear her 12-incher Alif on the Vent label, and Matiere on Make Noise Records. From 15th June 2019.