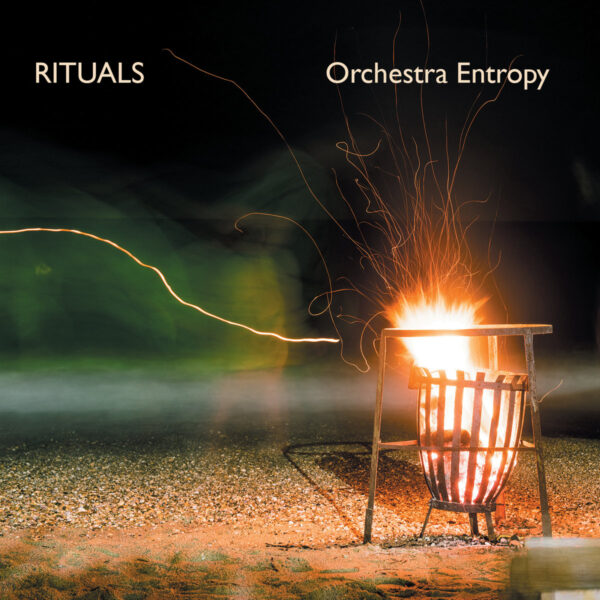 Of course, the contemporary British avantist doesn’t really need to have a smattering of the intuitive capabilities of a Bletchley Park boffin, but if by chance, he/she does…well, it’s aces all the way. Especially so when tenor saxist/composer Matt London’s graphic score for “Rituals” is laid out for fellow band members of Orchestra Entropy to inwardly digest. A ‘get out of jail card’ when notational drafts were found to be slightly wanting. “Rituals” is cut from the same cloth that had its origins with a number of kindred spirits from the late sixties/early seventies. The bewitchingly colourful charts of Crumb, Ligeti, Earle Brown and Berberian (C), now surely deserving of equal billing with anything hugging precious wall space in art gallery world. As sleeve note details are a little skimpy, it appears that Matt’s requirements of the players were contained on just “two hand-drawn panels”… which relayed “various open notations and graphics plus two trio sub-pieces for the performers to decipher…” The sole aim being to chip away at the improvisations, so that the resulting music builds and transforms itself, with the composer coming on not as some mad-haired tyrant shooting lightning bolts from his baton, but instead as a kindly tour guide, not too worried if a few of his flock deliberately wander off route occasionally.

A live recording, made at Jerwood Hall, LSO St. Lukes, London in 2018,, this nine-parter sees the expanded version of Ensemble Entropy on a relatively unhurried blimp ride over a series of fairly level playing fields, with the five brass/woodwinders (positioned in the gondola section naturally), calling most of the shots. Be they “Part One’s” rumbling belches from the trombone of Sara Gail Brand or the green-faced queasy blarts and snorks of “Part Seven”. For me, the most arresting fragment is the oddly named “Skelf”; which plants the spotlight beam on Moss Freed’s tweaked out-of-shape six- string and what might be a tiny army of key-wound percussive toys with drummer Matt Sanders simultaneously channelling Crimso’s Jamie Muir (minus the moustache wax and blood capsules…) and those light of touch Chris Cutlerized interludes found on “Legend”; Henry Cow’s debut sock hop.

Racking up its eighty-fifth release, you don’t really need me to tell you that Sheffield’s premier imprint has continued to maintain its strong manly grip on quality control. Orfeo 5, The Keith Tippett Octet, The Caines/Archer Axis, Weavels…and now The Entropy Ork! Another piece clicks firmly into place.