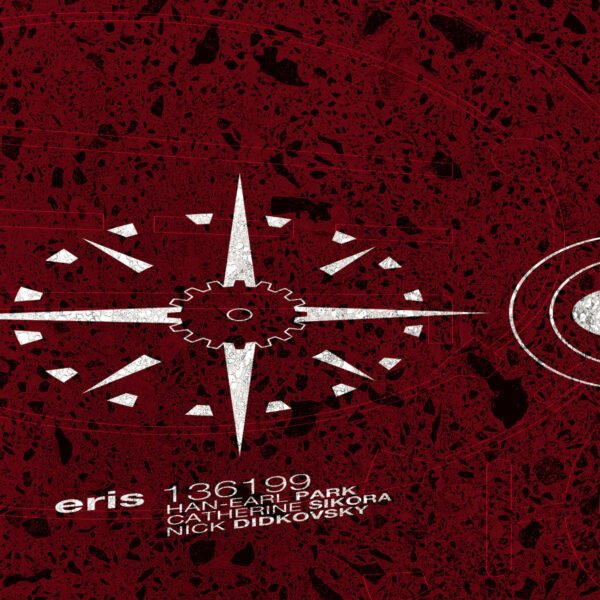 Here’s one for lovers of astringent free jazz. If we’re talking kaleidoscopic, thuggish, optical retina-effect astringent free jazz, that is. This is a banging example; great recordings made by Charlie McGovern at two dates in November 2017, one in Copenhagen, the other in Newcastle in the UK. Mastered by Richard Scott. Eris 136199 appears to be Park’s premier US grouping; he also has a UK variant featuring Dom Lash, Caroline Pugh and Mark Sanders going under the name Sirene 1009.

At the top end of the tracklisting, the four pieces that make up “Therianthropy” have a kind of Elliott Sharp / Carbon feel in places (which is where I would also place Didkovsky’s Doctor Nerve, if pressed), but without so much of the austere gestural approach that I associate with that particular 1980s grouping and their like.

“Adaptive Radiation” is in three parts. Didkovsky and Park’s playing is busy while Sikora ranges from brutal to delicate. In a supporting video at the Buster And Friends website, Catherine Sikora’s fingers move in fascinating ways, almost like Alien facehugger tendrils, reminding me of Jason Kahn’s hard-working digits on his euro-rack analogue synthesiser. The second part is a mad scramble up loose terrain. “Universal Greebly” features some of the best incendiary guitar wrangling I’ve come across this side of mid to late 80s Sonic Youth. For what it’s worth, my runners up for this dubious accolade would currently include Dirk Serries and David Birchall. Immediately, both guitarists set-to with more 70s-style influences; a kind of melding of prog-jazz and No-Wave. Towards the end there some nice incidents of pickup abuse with a blunt object. Shimmering vibrating guitar screeds. Just the ticket. Continuing their subversion of traditional rock guitar tropes, Park and Didkovsky indulge their inner axe-fiend on “Hypnagogia I” with crystalline dive bombs and other detourned techniques stolen from 80s hair metal technicians. Here, there’s even some Hillage/Holdsworth style Gong-like guitar glissando. For a few moments there, I was convinced I was listening to a space-rock record rather than jazz.

I’m impressed. After a slightly slow start with it, I’ve found myself coming back to this album again and again. The more attention you give it, the more you get out of it. I find it an exhilarating, intense space to inhabit for an hour and ten minutes. Park, Sakora and Didkovsky have constructed an extremely captivating slew of wistful improvised post-jazz noises. Han and Nick’s guitars are approached as sound-making devices much of the time, and as such take on tight supporting roles for Catherine Sikora’s barnstorming saxophone in muscular and fascinating ways. This is none of your dour, worthy, self-sacrificing hair-shirt improvising or take-no-prisoners blast of wilful abandonment; you can hear the musicians bouncing off each other and having fun. These musicians are working at their limits, both physically and psychically.

The disc comes in a plush full colour foldover digipak. The geometric designs on the sleeve recall a hyperactive quasi-sci-fi futurism of late 80s and early 90s rave/acid house flyers, which brought a sudden wave of welcome nostalgia to my faded noggin. T shirts are available from the website; “limited edition wearable dischord”, apparently. Super.