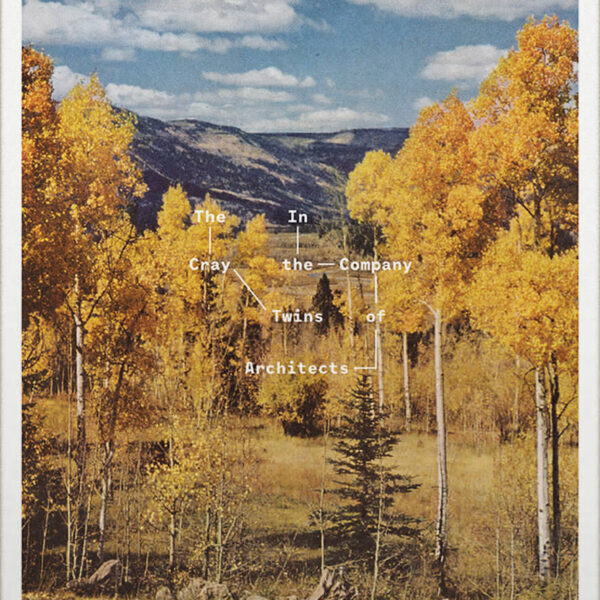 Here is the second album from The Cray Twins, their follow-up to the 2016 item The Pier. In The Company Of Architects (FANG BOMB FB029) is likewise released by Fang Bomb and like its predecessor features contributions from numerous fine musicians from contemporary realms – including some of our favourites, such as Werner Dafeldecker, Bruno Duplant, Antoine Beuger and Kai Fagaschinski.

The notes call this group a “virtual collective”, of which Paul Baran and Gordon Kennedy are taking on the role of directors, performing sampling and editing rather than conducting a group. It’s possible that the players may not even have met up at the same time; all the hard work was done assembling recorded segments in the studio with consummate care. There’s guitar, chimes, saxophone, flute, bass clarinet in these drifty mixes – and plenty of keyboards, electronics and samples from the Cray Twins. The main event here is the long title track – 38:10 of disquieting and incredibly sad music, sometimes punctuated with singing voices and other elements. What’s impressive on this epic sweep is how the music remains tense, fascinating and full of content, despite proceeding at a painfully slow pace (a resigned weariness in its every step). Baran and Kennedy leave plenty of space in this grandiose sideways look at the world, by which I mean the musical statements clip together as satisfyingly as a dovetailed jigsaw puzzle cabinet, and the music never collapses into a soggy drone of digital rice pudding. One enigma follows another; you’d need the combined skills of Sherlock Holmes and Albert Camus to reconstruct this existential crime scene.

Less keen on the spoken word piece ‘The Absence of Architects’ which cuts up a recit from Jessica Evelyn; perhaps this one edges too close to a meaning which can be decoded, hence makes me grumpy. But we close with the eerie track ‘Anarchitects’, 12:24 of ghostly denatured and detuned music with equally disembodied voices floating all through it like spirits of the air. At times it seems like Cray Twins are capable of building a transparent tower in the sky, airless and weightless, but here I am being too sympathetic to the “theme”. The front cover naturally enough is a photograph of a nature scene with no architecture in sight, but there is a tower block image inside the digipak whose brutalist monochrome grid could crush a thousand fragile souls.

Me, I clutch for a dark subtext to all this “stratified sound” (as the press notes have it), because I liked the solo records of Paul Baran which always had a very critical dimension, sharp and subversive attacks on contemporary British society. But on this occasion I clutch in vain, it seems. In The Company Of Architects is probably 90% pure sound, an exercise in studio construction; they take liberties with recorded sound, and play hob with the precepts of free improvisation, as part of this exercise. The result is forlorn, abstract, mysterious; but not necessarily critical of modern life. From 15 June 2019.