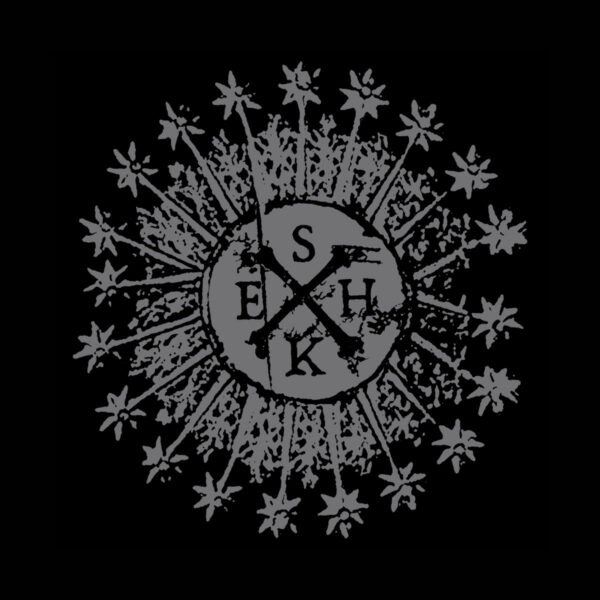 At the time of writing, a limited print run of 100 cassette copies had been made and all copies have now been sold; that means 100 lucky people get to experience the closest equivalent to Hell that any sane person or people can conjure up. S.E.K.H. is a Spanish duo serving up an alarming experimental mix of black metal, industrial, noise and cold dark ambient guaranteed to put most TSP readers off their breakfast (and lunch and dinner) for the day. This cassette is a compilation of two EPs, the earlier single-track “Acéphale” and the four-track “Arkhé Tenebre”.

“Acéphale” alone is quite the sonic horror-film soundtrack experience distilled to its most horrifying elements: the pounding machine rhythms and beats, unrelentingly oppressive but not without its own subtle tonal attractions; the cold-blooded serpentine ghost voices gabbling over one another and over the top of a deeper monster voice rumbling in the dark background; the deep cavernous ambience; the screeching guitar feedback and dissonant chords – all combining into a multi-layered soundscape of delirious dark elegance. The sound is clear and clean in that dry airless way found in catacombs recently opened after two thousand years of entombment. Electronics are used sparingly, as if the musicians can’t quite find an opening in the slurry of noise and sound to add blips and blops. Never mind, a place is soon found for them in the underground thrumming of power-electronics noise drone near the end of the track.

The other tracks resemble short snapshots of different aspects of Hell where “Acéphale” was a guide to it. “Neshamah” is a gloomy introverted ambient piece while “Deus Sive Machina” is a whirlwind of phantom death-rattle voices, flipping industrial percussion rhythms and crunching metal guitar slabs. “Mercurial Spine” features the most frightening elements of ambient, industrial and black metal noise horror. The last track is very much in the camp of oppressive martial death metal, noisy orchestral cacophony, guitar feedback hysteria and flippy pointillist machine jackhammer rhythms.

While perhaps that last track may be overdone and excessive in its high-camp monster death metal histrionics, the rest of the compilation is an astonishing ride into the darkness of humanity’s present-day predicament on the edge of self-inflicted annihilation through ideologies reaching their ultimate peak of internal contradictions that leave populations in unending war, poverty and misery, and planetary breakdown. In the climax of extreme capitalism is to be found breakdown and exhaustion of the planet’s resources. Reference to headlessness and the concepts behind the original EPs making up the compilation suggests the bandmembers have been reading the works of 20th-century philosopher Georges Bataille. The major achievement of this work is that even in the depths of horror, despair and unending catastrophe, there can still be found mystery, wonder and even beauty.