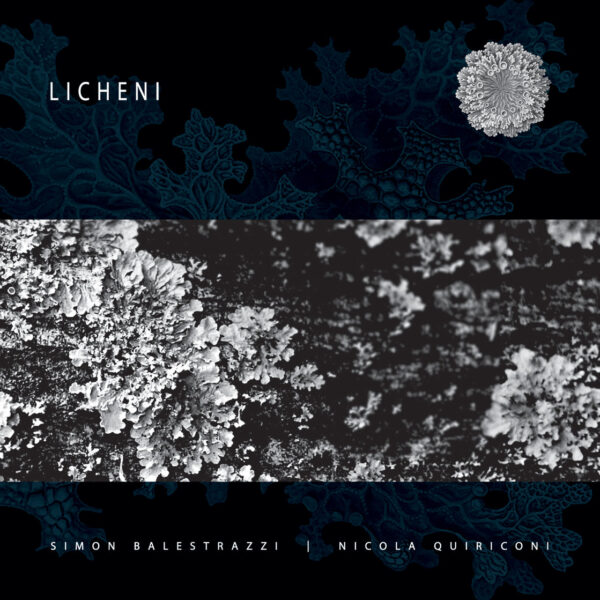 Fine duo team-up from two Italian masters of all that is dark and occluded in sound-art…Simon Balestrazzi and Nicola Quiriconi have crossed our briar-patch before as part of the Daimon trio, and in their own solo and group projects (Nicola Quiriconi is part of VipCancro, for instance), but this Licheni (AZOTH REBIS 009) release is their first duo collaboration. Seven experiments in intimate noise-making, using not much more than amplified objects, close-miked things, home-made instruments, and the human voice…what starts out as inert crackling and crunching soon takes on a life of its own and turns into creeping ectoplasm, slug-like monsters of small size creeping across the leaves of many a fetid cabbage. The intention behind their method is that that they should both “grow” into each other, much like lichens in fact, so that one entity is inseparable from the other. It’s a pure, organic process, even if it may sound like science taking liberties with nature. The noises here are sandwiched together as tightly as jam in a picnic hamper, evenly spread over your buttered scones, if you get my drift.

They refer to this resultant array as “a dense electroacoustic ecosystem”, and any enterprising entomologist or student of microscopic protozoa is invited to apply their listening apparatus to discover the teeming life that is breeding on these Petri dishes. While this is a departure from the supernatural-occultist themes that I usually associate with Balestrazzi, it has a kind of matter-of-fact style, all concrete statements and basic home truths, which is appealing. I also appreciate the careful, slow-moving deliberation with which they conduct these odd experiments, never taking anything for granted. From listening to this, you will obtain a vivid explanation of the simple facts about a lichen (i.e. they are never just a single organism – to live, it depends on co-operation between fungi, algae, or bacteria.) From 3rd July 2019.

In same package from Simon B., we have Less (AZOTH REBIS 010) by Corrado Altieri. This fellow has performed as one half of Candor Chasma with Simon (whose releases The Key and Rings are recommended), and he’s also done the harsh noise power-electronics thing working solo as Uncodified (not heard by us). On Less, we hear him experimenting with more general and undefined electronic abstractions, in modes that sway between something resembling a pastiche of classical experimentation from the 1950s and 1960s, and forays into more contemporary techniques such as dub mixing, drone, and blanked-out pulsations. His method is to have about two or three elements working in tandem at any one time, and pushing them back and forth with the mixing desk tools. Competent enough, sounds fine, but not especially exciting or innovative; for me, Alitieri just isn’t putting enough of himself into the work. From 3rd July 2019.