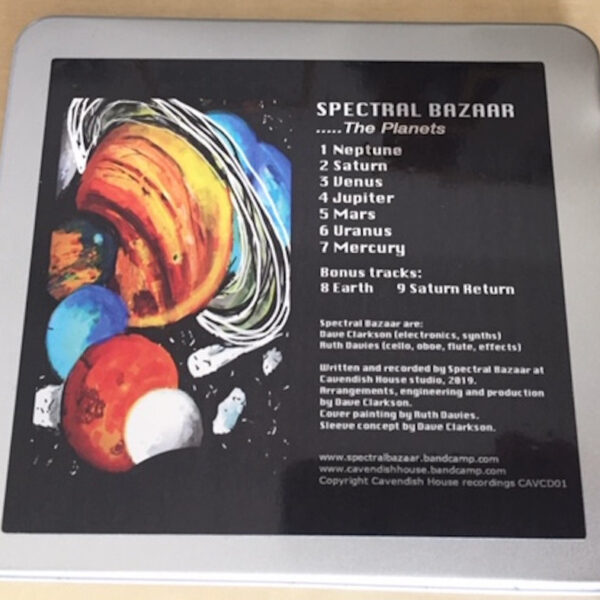 Manchester duo Spectral Bazaar are Dave Clarkson and Ruth Davies and have been around since 2015, and The Planets (CAVENDISH HOUSE cavcd01) is their first release…seven instrumental tracks, on which they combine contemporary electronic music (Dave) with classical music (Ruth), “treating” instruments such as cello, flute and oboe in the studio.

As it turns out, the electronic side of things does tend to dominate this album, but when the classical elements do shine, it’s a pleasing effect. At their best, Spectral Bazaar do manage a nice atmosphere of sorts, and there are some half-decent tunes to be sifted out of the over-produced and over-laden mix. At their worst, they are capable of producing dire disco music, as on ‘Jupiter, the Bringer Of Jollity’, which is heavy-handed and stodgy. The theme of the record is an enduring one to be sure, and the duo keep referring back to the Gustav Holst suite “The Planets”, noting that it’s now been 100 years since this famed and very popular classical piece was first performed.

Spectral Bazaar are not attempting a “cover version” of Holst, but the same planets are chosen (reflecting the fact that there were only seven of them in the recognised solar system at that time). The promotional notes dwell on this at some length, but what surprises me is that there isn’t a single reference to Tangerine Dream, The Cosmic Couriers, or any other outer-space inspired forays to be found in the Kosmische canon. Perhaps we should be grateful for that, and the similar lack of Radiophonic / Dr Who references. However, I’d have welcomed a word in favour of The Man Who Fell To Earth, a film which any sensible cinema-going person loves, and which made dramatic use of the Planets suite music in ways which only Nicolas Roeg could do.

Reasonable effort; next time I would like to hear more care and attention given to composing stronger melodies, and perhaps easing off a bit on the accelerator pedal in the studio. They perform with zest, but Spectral Bazaar are still uncertain what direction to take with their music, and need a bit more time to establish an identity of their own. First 100 copies are packaged in a tin box; later pressings will be regular CDs. From 15th July 2019.