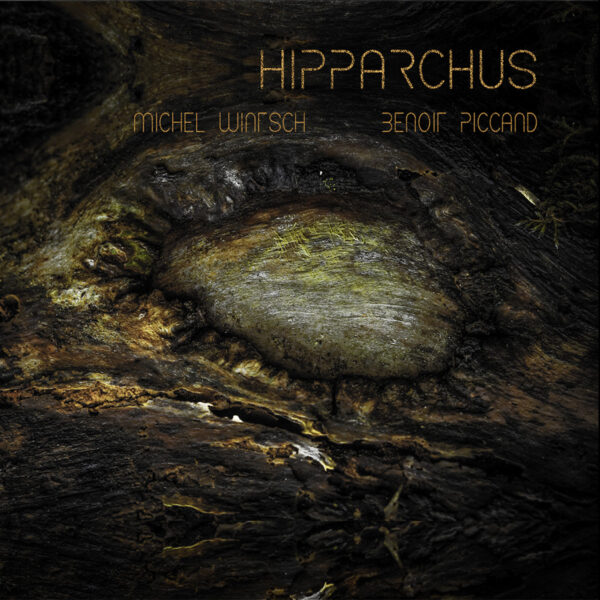 Swiss keyboard whizz Michel Wintsch has grooved his choppments on certain outings with his trio WintschWeberWolfarth, who play a kind of intellectualised jazz with added horn-rims and library cards…he’s pretty “hot” on both the synth and the piano, but it’s the latter hammerklavier device which we get to savour on today’s dish of springy frites. It’s called Hipparchus (WIDE EAR RECORDS WER038), and on it Michel is joined by Benoit Piccand playing a particularly spicy glommage of live electronics. From what I can gather, the talented Piccand also plays the guitar, but he’s more often seen on the other side of the studio desk performing the necessary technical production tasks when called on by other jazz musicians.

Hipparchus is an odd and at times ill-fitting mix of styles and sounds, and rum ideas…it’s pretty much what you might call a “prepared piano” album, mutating the normal sound of the piano all to heck, until we’re in looking-glass world and down the rabbit hole. The electronics and keyboard often meet in the middle of some sterile, abstract no-man’s land; the piano runs and fills (all improvised, it seems) veer now and then into Cecil Taylor territory, in a coldly clinical sorta way, then suddenly take a by-way into sharp, discordant clusters that would give Pierre Boulez toothache for a week. Meanwhile, the electronic half of the proposition is executing bold turns and whoops with his hand-cranked whirligigs; one might almost call these noises aural “leaps for joy”, except the music is so darned serious about itself, a charge which I have often levelled at Swiss jazz music in general and other releases on this label too. Even so, I like the bracing no-nonsense attack of this pair, it’s very far from being self-indulgent music, and the streams of musical utterances are always terse, never verbose. If your idea of a good time is a visit from the tax inspector, this’ll suit ya fine.

The record has a conceptual dimension (though not one that calls too much attention to itself), paying tribute to an Ancient Greek mathematician who is often credited as the father of trigonometry. How the music connects to this fact, or the ideas of Hipparchus, or even to the science of trigonometry is not entirely clear. In the press notes we’re also reminded that Edgar Varese was, in 1924, positing a new form of music that would ultimately make the piano redundant if he got his way. Evidently Wintsch has not abandoned the piano completely, but the Varese remark is probably supposed to taken as the forebears of electronic music and the devices that create it. A crisp, astringent piece of work from 15th July 2019.