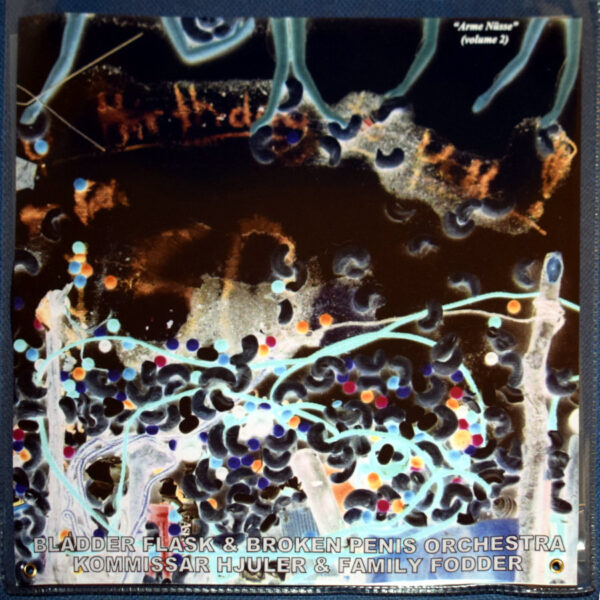 Here be more emanations and effluvia from the growing multi-verse of Richard Rupenus related materials…two vinyl LPs which involve reworkings and original contributions by other creators, more or less in orbit around the notorious Bladder Flask LP which Rupenus released in 1981.

We noted in July 2019 this ultra-bizarre CDR where Broken Penis Orchestra (Stan Reed) applied his demented magic to the task, something so fractured and crazy that the term “remix” doesn’t even begin to cover it. Part of that project has now resurfaced, I think, on the first of today’s vinyl offerments – a split album called Arme Nüsse (Volume 2) (PSYCH.KG 485). Spin side one of this grotesque biscuit to savour again the twisted joys of ‘The Groping Fingers…’ escapade; may I refer the reader to our previous review for an attempt to come to terms with this collaged, layered madness. The B side of the split contains, amazingly, a collaboration between Kommissar Hjuler and Family Fodder. The latter were post-punk heroes in the late 1970s, and their first single on Fresh Records could have been a bigger smash if only it had been released in time to take advantage of John Peel’s premature spins of the pre-release promo. The Kommissar is a highly prolific creator from Flensburg (on the Germany-Denmark border) whose work occupies some twilight space in between music, performance art, sound poetry and various other extreme forms of modernism, and he always brings an absurdist dash to everything he does.

I can’t imagine a less likely pairing of people to work together, but this may be testament to the power of Rupenus and his persuasive powers, rumoured to involve a type of old-school mesmerism not used since the time of Rasputin. Hjuler and Fodder – I’ll assume it’s just Alig Pearce and not the whole band, as I hear a deal of accordion work here – turn in seven experimental tracks with odd, ambiguous titles, and create a fug of puzzling inconsequential nonsenses. Collaged found voices, weird sounds like mice nibbling the furniture, and generally balmy antics are combined with the finest romantic and melodic fugues Alig can summon from his piano and accordion, plus a few forays into glorpy electronic sqwudge when an extra dose of exotica is called for. The connection to Bladder Flask seems pretty remote by the end of it, and while Reed’s side is I think based on some rediscovered 1981 materials from Rupenus, this Hjuler-Fodder mental vacation appears to be mostly new and original gloop but done very much in the spirit of the project. Although…Reed is violent and unsettling, clearly out to destroy our sense of normalcy, while the Kommissar and the Fodder are that bit more gentle, slipping the rug out from under our brain without us noticing. Their side is loopy, humourous at times, but still delivers the mind-smearing feeling of strangeness and disconnect by the end of the seven sessions. 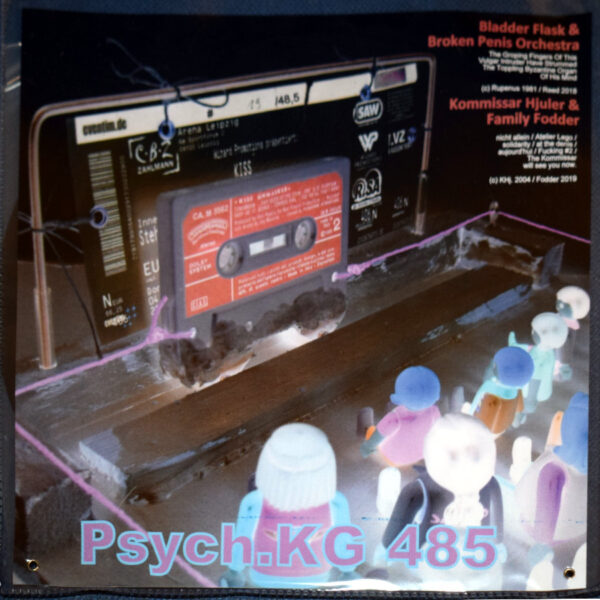 Artworks are notable…the front cover looks like the psychedelic X-Ray form Hell, reporting on an internal disease you certainly don’t want to know about, while the back cover is a playful construct showing Playmobil characters enjoying a rock concert, except that instead of a band they’re looking at a huge cassette tape tied to a balsa-wood stage with purple string. Pretty zany, eh? Collectors may like to know that this release exists in at least three variant editions, each with different titles and radically different artworks, the more extreme versions released in minuscule numbers and resembling hand-made gallery pieces rather than boring old “albums”. This reflects the inspiration Kommissar Hjuler has drawn from the Fluxus artists. From 17 June 2019. 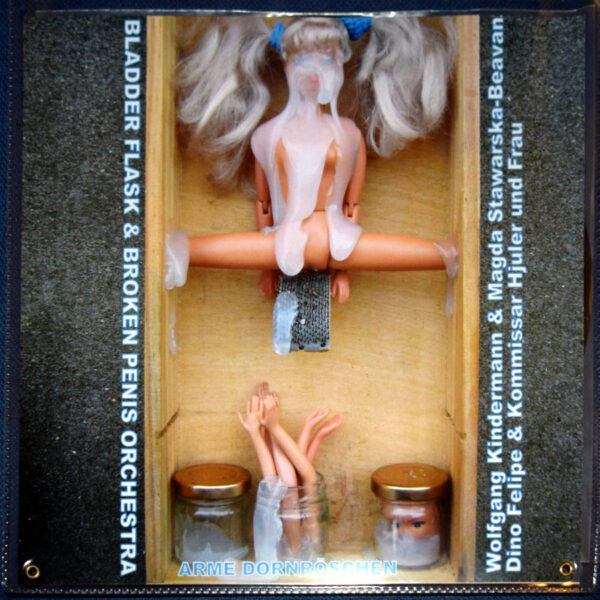 The second item is called Arme Dornröschen (PSYCH.KG 483), likewise a split, likewise a showcase for several artistes and collaborative works. On the first side you get the BPO / Stan Reed 2018 reworking of the classic Rupenus piece “One Day I Was So Sad…”, also available on the Orgel Fesper CDR. I did spin it again today just to get the experience of hearing it as one side of vinyl. As expected, the sheer incoherence of it starts from the get-go and doesn’t release its hold on your poor cerebellum, until you too are dragged down to a state of lunatic frenzy. What I’ll add is that today’s spin brought home one of the striking aspects of this concoction, the odd and ill-fitting mix of vulgar, crass humour with moments of near-pathological darkness. It’s like watching a slapstick movie from the 1930s spliced with a low-budget Italian zombie movie – custard pie fights morphing into monstrous flesh-eating. Just one of the many tricks of psychological warfare this record can conceal; you’re pulled in both directions at once until you can hear your own sinews snapping.

The flip of this one is less spectacular. ‘Who/Wer’ is the soundtrack to an art installation piece of the same name by Magda Stawarska-Beaven, a Polish artist whose recent work explores “the shifting sonic and visual identities of cities”. What we hear is rather uninteresting field recordings accompanied by a voiceover, spoken in two languages at once, describing what’s happening in this rather ordinary urban scene. Wolfgang Kindermann wrote this text and supplies one of the voices. In this tedious urban drama, a woman receives a mobile phone call and her life is ruined, or something; it’s hard to make out what’s going on here, as everything is deliberately obscured by this two-voice tactic. The very precise attention to detail, when applied to this banal subject matter, is infuriating. I’m missing the point of this one by about a mile, but it probably connects to the overall themes of absurdity and futility that the Bladder Flask LP expresses so successfully. There’s a third piece which closes the B side, this one credited to Dino Felipe, Kommissar Hjuler and his Frau. This ‘Daswesender’ is more in my line; strange voices and noises, all set forth in a stream of seemingly-random collision edits and assemblies that produces the most wonderful nonsense. The cover art to this release should need no further commentary from me. From 17 June 2019. 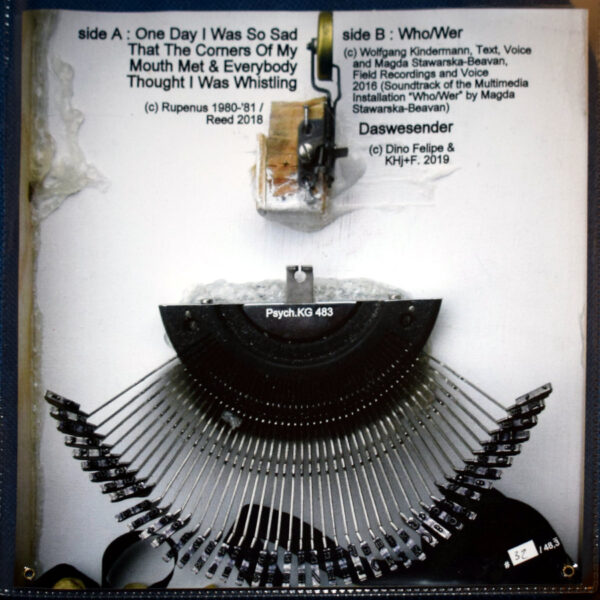