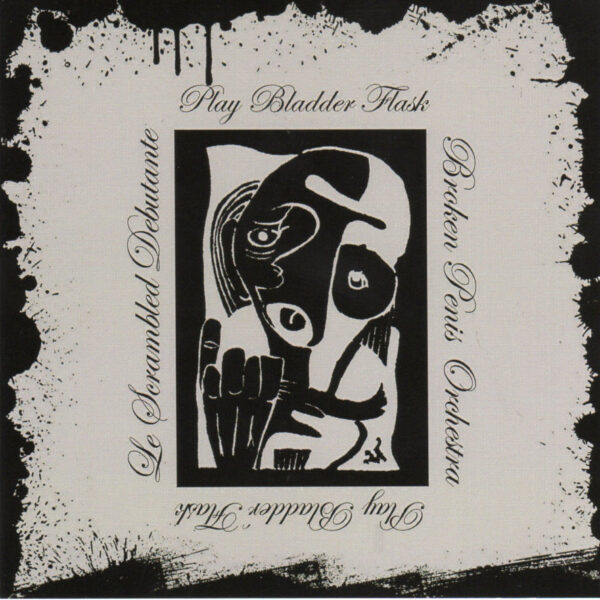 When he was about 16 years old, arch noise-maker Richard Rupenus concocted an astonishing cut-up record under the alias Bladder Flask, released in 1981 with the verbose title One Day I Was So Sad That The Corners Of My Mouth Met & Everybody Thought I Was Whistling. We never heard it until its reissue in 2001 in CD form, but it hasn’t taken long for its insanity to burrow its way into my noggin; it’s not a record you would play for fun, but its fractured consciousness, incoherence, and sheer Dadaist lunacy are considerable. Sourced presumably from multiple found sounds, tapes, and records, the piece was assembled in a deliberately fragmented fashion, each sample lasting only a few seconds and bearing no connection whatever to the next juxtaposed sound. In method, that’s not far apart from how Dali and Bunuel claimed that they assembled the first surrealist movie, Un Chien Andalou. Another reason I cherish the record is because it’s quite unlike the brutal noise of The New Blockaders (TNB), the principle and more well-known Rupenus project (in as much as underground noise has impacted on our culture, it’s well-known). Even the cover images for Bladder Flask were pretty poignant; the found engraving on the front depicts an anguished young man perhaps contemplating suicide, since there’s a revolver on the desk among his disordered papers. The CD reissue adds another image, that of a well-dressed couple in society seated in armchairs and yawning at each other pointedly. Both the pictures convey something about the futility of existence.

Well, that 1981 record has now become even more embedded in the cultural bloodstream (along perhaps with that other great cut-up record by Hastings Of Malawi), and is now “reworked” by two contemporary artists on the CD Le Scrambled Debutante & Broken Penis Orchestra Play Bladder Flask (ORGEL FESPER MUSIC / TWIN TUB & BEAVER PRODUCTIONS). It’s a roaring success; they’ve remained true to the spirit of the original and somehow found ways to inject it with new life. Undoubtedly we should place this in a line with the recent NWW LP, where Stapelton did his reworking of Changez Les Blockeurs (the 1982 LP by TNB). Evidently the time is now ripe for re-inscribing these particular landmark releases and reaffirming their significance, through the act of remakes. Broken Penis Orchestra is the American player Stan Reed, and at one time we used to receive a lot of his solo cut-up records on the Psychochrist Productions label – sardonic, hilarious, out-of-control exercises in hyper-edits and nasty juxtapositions of materials, made with the express aim to shock. Reed also made indelible noise records as part of Blue Sabbath Black Cheer, has worked with Nurse With Wound, and has long been a collaborator with Rupenus, for example his connection with Nihilist Assault Group and Mixed Band Philanthropist. You’d be hard pressed to find anyone more qualified to take on the job of reworking Bladder Flask…but Le Scrambled Debutante comes a close second. This name is new to me. It may or may not be Allan Zane who started out making obscure bedroom tapes in the late 1980s from his obscure bedroom, and recently burst forth with an explosion of CDRs on his own label Le Scrambled Discs. Never heard these, but titles like Tekno Acid Meat and Omlette Douche From Mars (Live) may give you some idea what to expect. Their task on this CDR has been to re-present the original Bladder Flask LP, plus some recently discovered unreleased tapes from the same period, titled “The Groping Fingers Of This Vulgar Intruder Have Strummed The Toppling Byzantine Organ Of His Mind”. Another instance of the penchant for verbose titles which is one of the hallmarks of Bladder Flask; I detect a certain influence from Max Ernst, as if Rupenus wanted to remake Un Semaine De Bonte or one of the other famed collage novels (themselves exemplary instances of the cut-up).

The difference between BPO and LSD will leap out at you as you spin the first two tracks here, assuming you have any brain cells left after these two insane assaults on common sense. They’re both reworkings of ‘One Day I was So Sad…’ so presumably started from the same source material, yet are quite unlike one another. Debutante’s rendition is plain bonkers, a cartoon-styled jumble of ill-fitting elements, too many layers, wrong speeds; voices invading your head and turning you into a multi-schizoid. Tex Avery on acid; come to that, it’s also Bladder Flask on acid (Debutante’s acronym of LSD is clearly not just a coincidence). The easy-listening music samples at the start suck you in – and you think you can handle this “wacky” music, until it starts turning nasty. As for Broken Penis Orchestra, his take is equally jumbled, but somehow much more threatening and melancholic too. He seems able now to marshal his forces as though creating a symphony; a nonsensical symphony of noise. I like the frequent use of extended, grey, ambiguous noises; sounds which could be anything from a dog barking on Mars to an ancient recording of a nightingale in 1933. It reminds you in no uncertain terms of the meaningless of life, each sign as important as another, until nothing is important any more. Of the two, Reed’s version comes closest to aurally matching the image of the man with the revolver and his troubled state of mind.

That’s just half of the record digested though, and already I’m ordering my noose, bottle of pills and syringe for a poison injection – the full suicide kit, in fact. These two reworkings of ‘Toppling Byzantine Organ’ should complete the job if you haven’t already booked yourself into your local sanatorium. Among the sonic highlights awaiting you is an extended BPO passage of pure delirium – snatches of distorted dialogue alongside a forlorn salon piano tune from 1876, a lone melodica tootling meaningless notes, bouts of coughing, and general struggles with the furniture; I feel like I’m watching a nightmare version of a lost Laurel & Hardy short. On his track, Le Scrambled Debutante makes use of a BBC radio announcer clip in a manner not unlike that of People Like Us (in some ways our home-grown equivalent to Stan Reed and Christian Marclay, except she has now taken her amazing work into many new directions involving cinema, radio and art installations). The clip is a slightly smutty story which evidently delights the sniggering American; he repeats it ad nauseam, until the work mutates into a nightmare episode every bit the equal of the preceding. It’s all the more disturbing to hear the same source materials repeated, but in a different way. This is the kind of effect I normally associate with a bout of influenza, when I can’t help having the same fever dream a million times over.

Only 100 copies of this monster were pressed, and it’s a joint release on Orgel Fesper Music (the original imprint of Bladder Flask) and Twin Tub & Beaver, the Leeds-based micro label that put out a handful of Noise-Maker’s Fifes records in 1997, then vanished (until now). With new artworks by Rupenus, this is a truly one-of-a-kind release that serious collectors of dementia cannot afford to miss. From 27th December 2018.