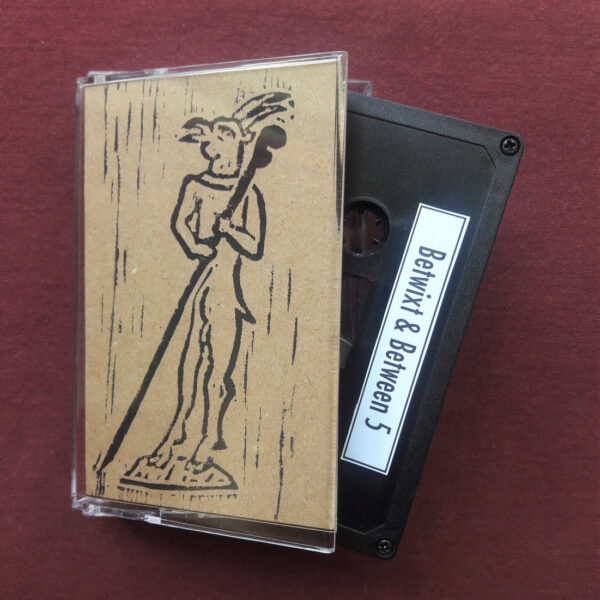 Betwixt & Between 5 (BETWIXT & BETWEEN TAPES) is a split release showing aspects of contemporary English playing that’s been influenced by traditional folk music. The artists showcased are the banjo player Jacken Elswyth and the singing group Alula Down; both new names to me. For a long time I have always claimed to love English folk music, although when I survey my collection of releases on Topic and Leader, I have to conclude that most of what I like is done by revivalists (many of whom started doing it in the early 1960s) which starts to raise vexed questions in my mind about what “traditional” folk might be. None of this seems to have troubled Jacken Elswyth, who goes ahead and creates beautiful music drawing on many sources, and does it in a very natural and spontaneous manner. On her three tracks here, she can take the traditional song ‘Sweet Lemeny’ and extemporise on it for some eight minutes, finding hidden depths in the melody, repeating certain phrases as she sees fit. Sweet Lemeny, Roud 193, has been sung on record by Peter Bellamy, Martin Carthy, and The Copper Family; seems to have been first gathered in 1837 and derived from a printed broadside. The words are strange; nobody quite knows what it refers to.

She also adds traces of non-folk idioms, including a certain amount of free improvisation and added drone, to enrich the performance. Neither is she exclusively English in her investigations; her take on ‘Last Chance’ shows a firm grasp of American Appalachian traditions that would have caused Alan Lomax to rewrite his thesis; she even manages to blend in two other fiddle tunes, including the stand-by ‘Cumberland Gap’, within this brief four-minute performance. Richard Thompson did this sort of thing with Scots and Irish dance tunes on Strict Tempo, an album I’ve always loved. Kudos to Jacken Elswyth, who did this one night in December 2018 at the London venue Cafe Oto; I’ll look out for her name on future bills.

Alula Down are a duo from Herefordshire, Mark Waters and Kate Gathercole. Their half of the split is four songs recorded in the studio, including their version of ‘Sweet Lemeny’, and ‘Sprig of Thyme’, a derivative of which has been recorded by both Anne Briggs and Isla Cameron as ‘Let No Man Steal Your Thyme’. Alula Down appeared at first glance slightly more conventional in their approach to contemporary folk, but I’m now discerning a certain modernistic minimalism in the instrumentation, and warming to it; I mean the odd clipped approach to picking out astringent notes on the acoustic guitar, sparing use of echo effect, and use of a harmonium drone that would have pleased Tony Conrad or Terry Riley. Kate Gathercole’s voice maybe isn’t that distinctive, but it is very honest, and she performs in a way that keeps all emotional excess to a bare minimum. This, to me, is the way that folk songs ought to be sung; no matter how traumatic the subject matter, the singer never falters. Their ‘Sweet Lemeny’ is the stand-out song for me; it conveys a chilling mystery, underscoring that we still don’t know what the song means or what really happened. Their ‘Three Ravens’ also has a stark edge, as befits this tale of tragedy and death, Waters finding some quite inventive chord shapes on his guitar to accompany the melody, while Gathercole whispers the vocal in slightly awed tones. In all, a very pleasant discovery; from 30 July 2019.