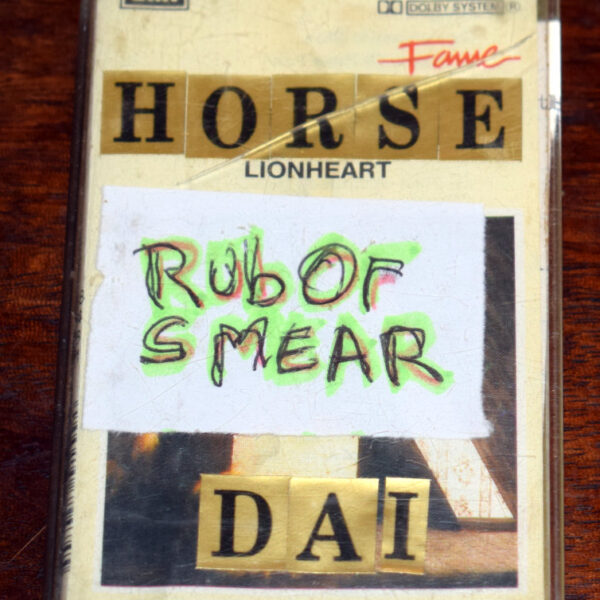 Latest Staaltape release is a real raw and dirty oddity. Dai Coelacanth made A Condemned Debtor Does Not Recognise The Horse using his own rough form of street poetry and found art, collaging the results into an indigestible package and recording it on top of an old cassette probably rescued from a charity shop 1 – in this case, the second album by Kate Bush reissued on an EMI budget label. Even handling the grubby yellowed shell of this item feels risky, like a contagious disease is being transmitted.

Playing the tape you have the impression Dai wanders the streets with a hand-held cassette device taping whatever fragments he finds in two-second bursts, interspersing these with short samples from the telly and whatever utterances he himself sees fit to pronounce using his mouth-like protruberance. As to the television snippets, I have the impression these come from daytime soap operas or other reservoirs of total banality; taken out of context, they transcend their own banality and become echoes of futility from the ninth circle of Hell. As to Dai Coelacanth, his own spoken-word interjections are completely unintelligible and incomprehensible. Perhaps this is deliberate. They’re more like grunts and sputterings from a primitive man learning to speak, or the deluded mutterings of a paranoid schizophrenic wandering the streets and mumbling his curses against the world. Everything comes out as a vicious snarl.

The technique extends to the cover artworks, which include secret messages written in felt-tip pens, meaningless torn fragments of debris from the street collaged on top of the Kate Bush inlay, plus an absurdist text hand-typed by Dai. The fragmentary nature of all this non-communication doesn’t amount to very much, and the whole tape succeeds in saying very little; added to which it’s extremely monotonous to listen to. I am prepared to believe Dai Coelacanth sees hidden meanings in every street sign and graffiti he glances at, but he fails to convey it to us. I guess I have failed to recognise the horse.

However, I do like the coarse surface of it all, which is a major affront to good taste and the limits of good sense, both good things to be doing; in this, Dai Coelacanth reminds me of another English outsider Filthy Turd, who always went one step too far with his horrifying tapes and CDRs of crazy noise and profane, nightmarish screes of verbiage. Filthy Turd had a vaguely occultist side to his work, and managed to appear a bit like a magus, a druid of the streets, whereas Dai Coelacanth has instead cultivated the image of a sociopathic bag-man. And a vengeful one, too; going back to that hand-typed text, it’s impressive how much paranoia, hate, and implied violence he manages to convey in just 15 lines. Then again, you do get amazing lines such as ‘[she] ducked into an alley and spawned duplicates’, a terrifying image of alien invasion body-horror worthy of William Burroughs. From 4th July 2019. 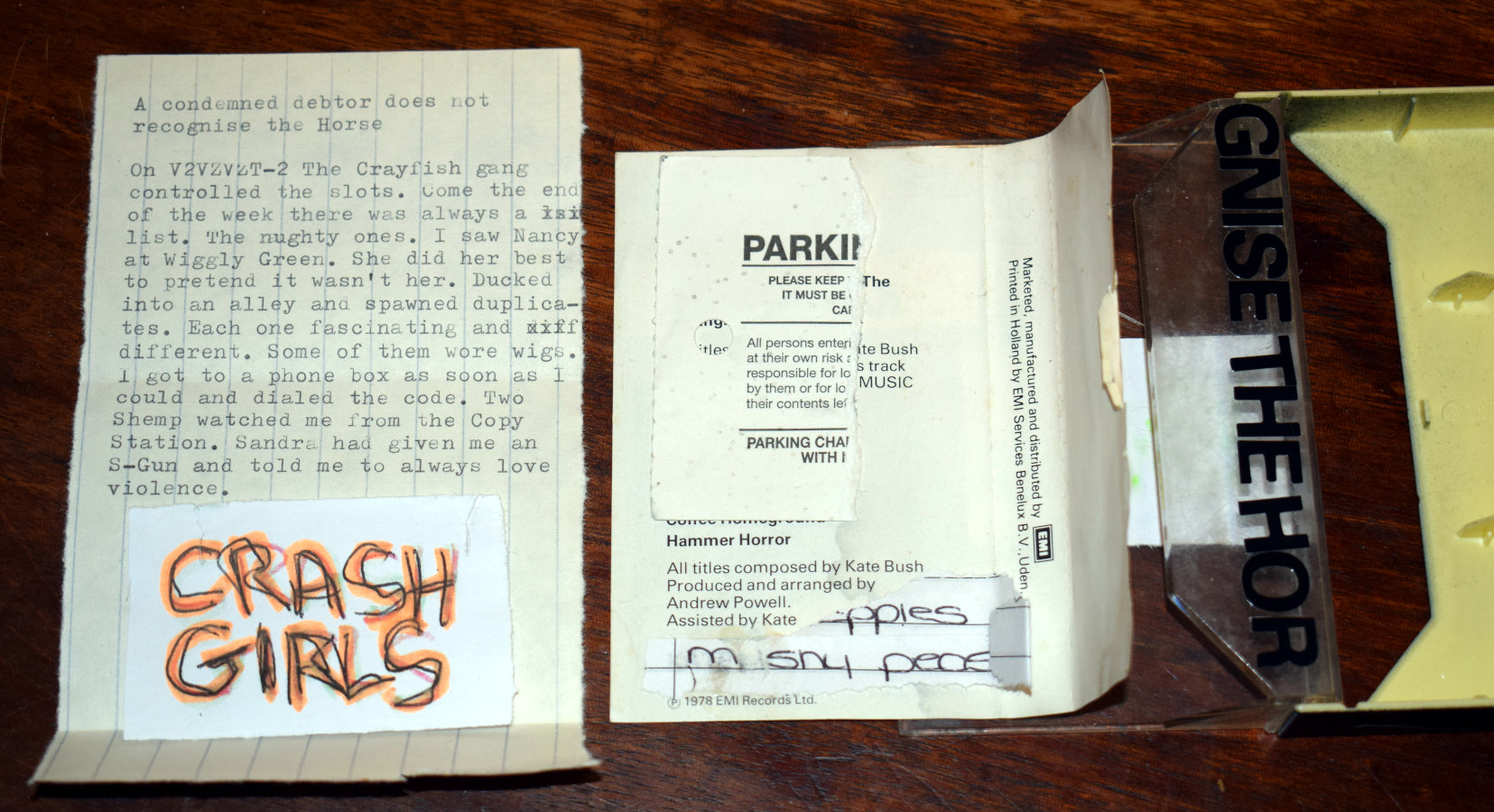 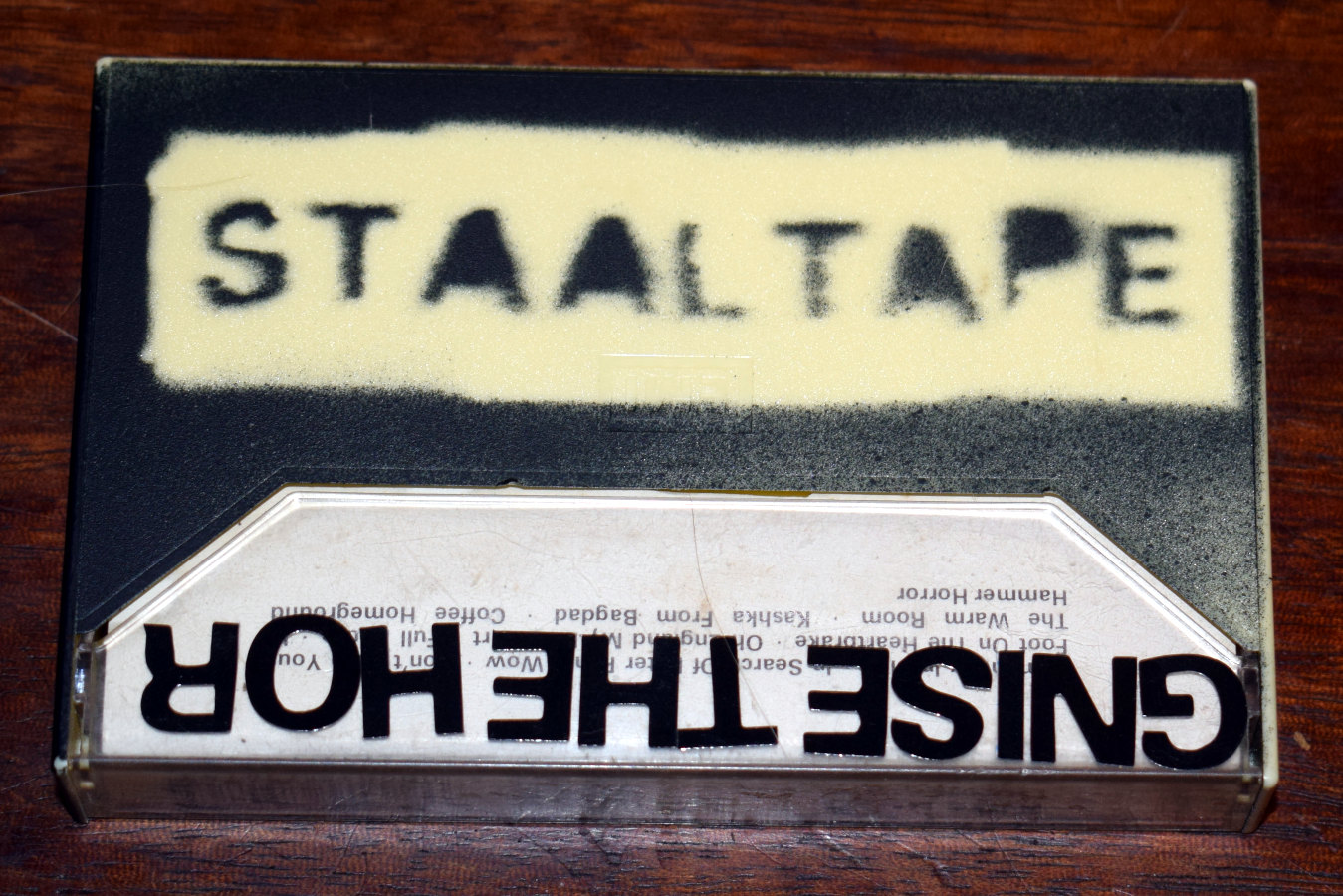