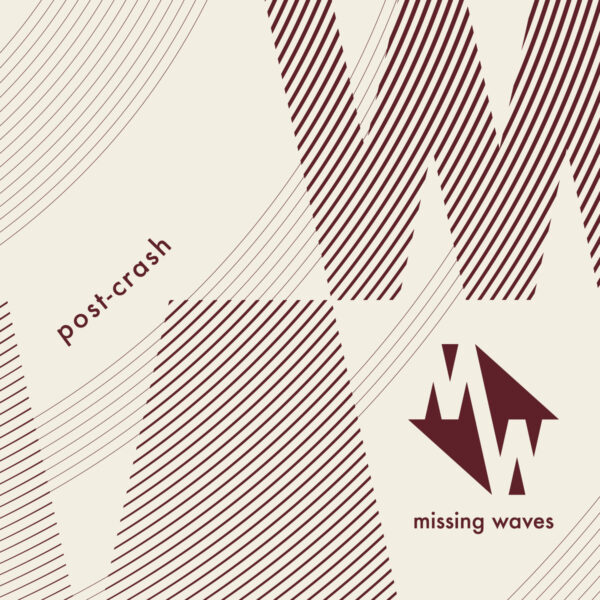 Missing Waves is a fairly new, experimental pop three-piece, whose relative lack of history wraps neatly around this record’s central conceit of memory loss and reconstruction after a ‘crash’. Alongside percussionist Nabil Bouteldja and vocalist Marie-Catherine Mossé, the lineup also includes saxophonist Daniel Palomo Vinuesa, who blended quietly into the understated atmospheres of Minizza’s Gainsbourg-esque interpretation of Huysmans’ literary masterpiece A Rebours, which I wrote about in 2014. That accomplished adaptation coincided approximately with the genesis of Missing Waves, so it’s unsurprising that the two should share a similarly breezy mood and the same label, Broccoli, which has made a name for itself in the world of high-concept, ambient pop.

While defined by a calm, almost sedated songcraft, Post-Crash confidently embodies the virtues of an eclectic set of influences without ever sounding particularly derivative or over-ambitious. Such knowing nonchalance encompasses Björkish semi-histrionics (‘Boys Don’t Cry’), jazzy trip hop (the mantric opener ‘Horizon’), the anthemic pump of ‘All is Done’, the sultry skulk of ‘Bassékilendo’ and the oddball peaen to ‘Flying Cats’; the song equivalent of a cat meme, which, full of meows and wonky jazz, nestles neatly between Kate Bush and Art Ensemble’s Les Stances à Sophie.

Such lightness of spirit, accentuated by Mossé’s breathy vocals and Vinuesa’s oft-breathy, off-kilter saxophones, creates a space and buoyancy that counteracts a darker lightness of forgetting; the intangible absence of something lost in a post-traumatic haze. While this amnesia is nominally that of a computer failure, the prevailing warmth suggests a human dimension in which songs are therapeutic acts of identity reconstruction, such as the reminiscing monologue in ‘Are We Like Clouds?’ or the accretion of vocal layers in hypnogogic sound bath ‘Là Haut’ wherein voice fragments unite in an expression of genetic purpose. It’s not unusual for a debut recording to display its debts so openly, but in the case of Missing Waves, there’s a very Platonic sense that their growth is informed by recollection.