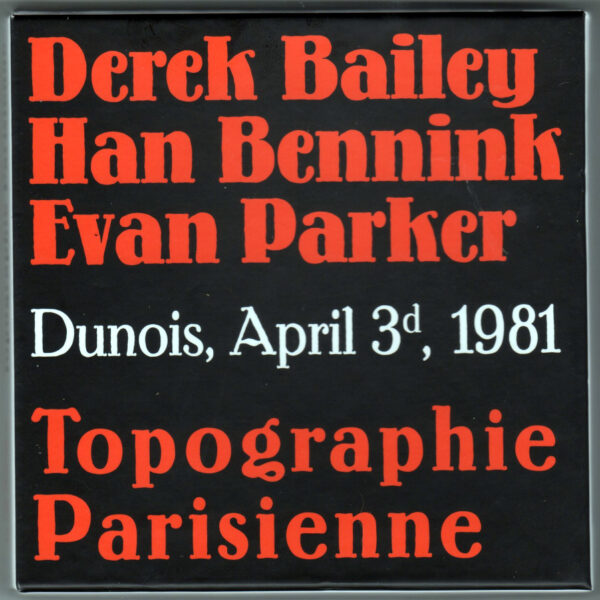 I remember it was one of those chin meets floor moments, when I discovered that the “28 Rue Dunois” archival set from Bailey, Léandre, Lewis and Parker had never seen daylight before in any way, shape or form before Jean-Marc Foussat, boss of Fou Records, got on the case. Well… colour me doubly amazed now, as that self same label has struck that rich seam yet again with a quad c.d. box set of live performances from Derek Bailey, Han Bennink and Evan Parker, date stamped 1981. A stellar cast, behind one of the most legendary free music albums of all time. I refer you of course, to “The Topography of the Lungs”, Incus Records’ first ever waxing 1. Curiously enough, the trio in question nixed the idea of recording a follow-up to this and only ever met up over tea and scones within much larger concerns such as those overseen by Alexander Von Schlippenbach and Manfred Schoof.

Naturally, a lot of water had passed under the bridge in the eleven years since “…Lungs” drew its first breath. 1981 had seen Derek Bailey washing his hands of the supposed security of fixed groups, force of nature Han Bennink had been clocking in with Peter Brötzmann and Misha Mengelberg, while the patron saint of circular breathing took up with Paul Lytton, Barry Guy and the aforementioned A.V.S. But in this righteously uncompromising genre, that’s to quote one genius author… “As Serious as Your Life…” this reunion saw things still travelling sharply on an upwards curve. Though it has to be said that “Topographie…” doesn’t quite spill all the beans when it comes to the secrets of free live dynamics. The band set-up was fairly fluid on this particular day and does shrink down to duo exchanges and also a couple of solo outings during its, gulp, three-hour, thirty-seven minutes and fifty second (!!) duration. Pacing and variety keeping things fresh I guess. As for the trio performances, timed at 41.38 and 45.45, (all tracks are untitled b.t.w.), Derek’s taut, glassy harmonics and stark chordage are inevitably hit for seven when Bennink (H) seemingly enters stage left and stage right simultaneously! His cluster bomb drums and unspecified what-have-yous (mebbe garden shears, bugle and child’s toy harmonica?) driving on Evan Parker’s fingers to flutter even more frantically over the keys of the soprano and tenor sax.

Needless to say, there are more measured avenues of research and development liberally dotted around this gargantuan collection. One splendid ‘for instance’ being disc three’s industrious conversations between Bailey and Parker, which are nicely complemented by Evan’s ten-minute solo vignette. But… by dint of the high clatter quotient, it really does boil down to the fact that a certain Dutch heavy hitter rules this particular roost. A catalyst, wild card and agent provocateur all rolled into the one package. Shaking his hand or indulging him in an arm-wrestling contest (just post gig), would’ve been the ultimate folly…..

It’s certainly been a field day for Derek Bailey-related produce in recent years. Following on from ‘Honest Jon’s’ laudable vinyl reactivation of other Incus landmarks (incl. the magnificent “Dart Drug”), this unassuming little box can surely be regarded as one of the major discoveries of 2019, irrespective of genre. 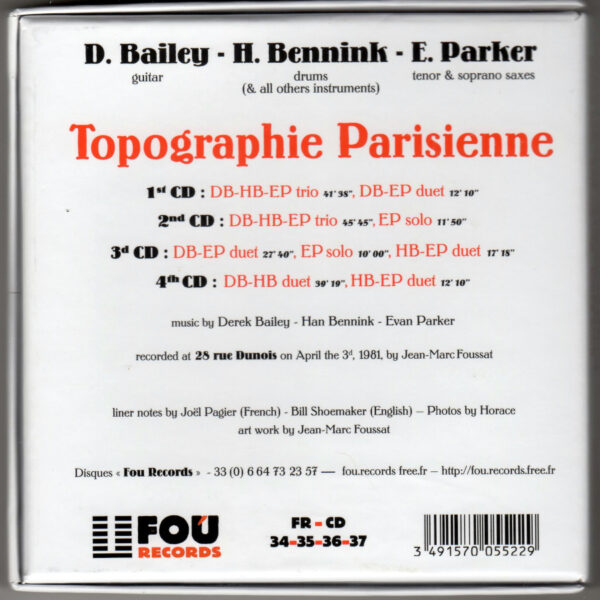