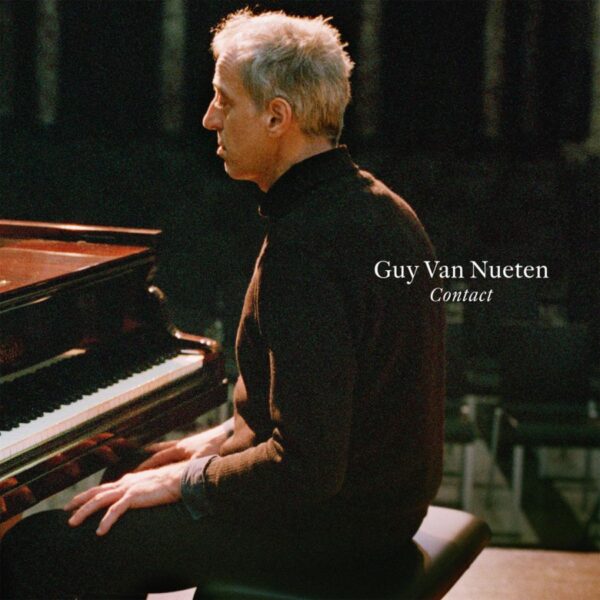 Belgian pianist and multi-genre composer for concert hall, film and theatre, Guy Van Nueten projects an aspect of grave intent while posing before piano on the cover of his new solo LP, Contact. It’s as if through meditation he has bared his soul to and through his instrument-companion in a calm before the stormy drama to follow. This, one quickly learns is a bit of a red herring: hop over to his website to be distracted from similar images by the haphazard flight of cartoon objects bouncing beneath a categorical list of his many musical specialisms. Click on these for recorded evidence of his broad field of activity.

Accordingly, eclecticism, emotion and whimsy emerge as the chief sensibilities on this collection of solo performances for piano, which run the gamut from climatic melodrama to cautious minimalism – often in the course of a single composition. ‘Isomorfie’ I – III reference an abstruse mathematical concept (to my ill-educated mind anyway) but might as well be showering notes over the suffering protagonist of some period drama. Following the time-un-honoured sequence of ‘medieval prelude, an African allegro and a medieval aftermath’, it also connotes a sense of ‘play’ that extends from the exemplary performance itself to the manipulation of audience expectations; one less subtly realised in the title piece section entitled ‘Inevitable Return of the Pacman’ (part of a loose trilogy initiated in 2013), which plods along agreeably enough but without any of the pulse-racing drama that I remember from my ill-spent days playing video games. The composer takes pleasure in our bemusement.

While Van Nueten has a history of whimsy (Merg (2009) featured song titles like ‘Adagio not in B’, ‘Aggression Var. 1’ or ‘Impro The Fruit’), one senses that such titles were added as an afterthought or as a cognitive bait and switch and are, perhaps, not to be analysed too deeply. Nothing is lost by not doing so. Rather, the emotional drama that plays out through this cohesive collection provides both sufficient orientation and range of mood to keep things interesting or, as is frequently the case, compelling. Devoid of edits, overdubs or additives of any kind, Contact explicitly betokens an unmediated, playful and (what could be easily mistaken for an) emotionally sincere listening experience – a standard that Van Neuten follows diligently throughout.