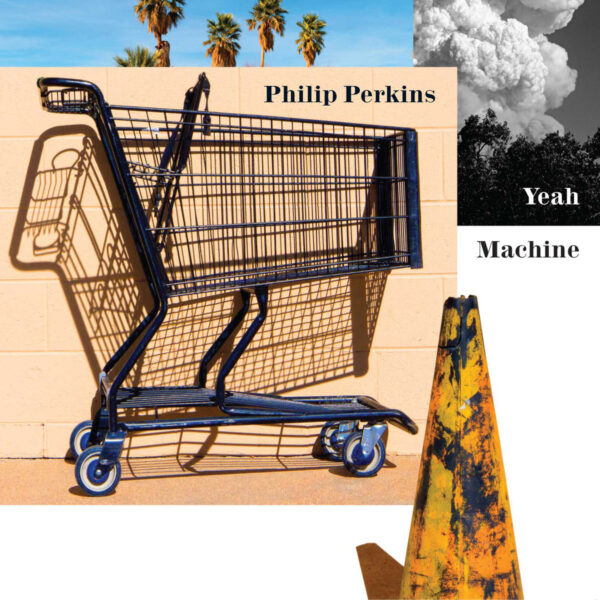 Latest release from Philip Perkins is Yeah Machine (ARTIFACT RECORDINGS ART 3004), which he describes as “live performances using recorded, made, found, purchased and stolen sounds”, alluding no doubt to the many sources that feed into his “noise constructions”. I’m assuming this tells us something about his mosaic-like method, his intricate technique, putting together many layers. Not that you can tell from the finished product, which delivers its effects in a remarkably seamless, unobtrusive fashion.

This San Francisco fellow first came on our radar with the fascinating release Mister Anyhow in 2015, something of a revelation to me personally, which prompted me to order what I could get from his back catalogue (which extends back into the early 1980s) and even to interview him for the magazine. Successive records haven’t quite magicked up the same wow factor as that 2015 item, and on first blenkin Yeah Machine is capable of passing by almost unnoticed, so limpid and restrained it do be. Yet Perkins is never less than compelling, and even though these sublimely laid-back drifteroos may not call attention to themselves, you’ll soon find yourself succumbing to the magnetic charm. While earlier records have not been hesitant about showing us the joins, and revealing the original sources for everything, Yeah Machine has been varnished and reworked to the point where every sharp edge has been blurred and every sonic image tweaked into soft focus. The blending of sounds, I’m guessing, is also part of this – creating frequencies in a strange zone where things start to lose their identity. Yes, it’s a kind of amnesiac music, a document of a city losing its memory.

The other feature that I continue to enjoy about Perkins’ work is that it’s benign and welcoming, and it seems to me he couldn’t create a “menacing” sound even if he tried. In Perkins’ world, the sun is always around and the weather is always balmy, even if on this occasion we don’t actually know where we are, or what we’re looking at – it might be anything from shadows on a building wall painted beige, or a waterfront vista in the afternoon. The image of the shopping trolley and its shadow on the front cover only serves to confirm most of these impressions of mine; we look at it at almost in puzzlement, as though we’re not quite sure what purpose it serves, especially since it’s juxtaposed with a smoking volcano and an old traffic cone smeared with tar. The shopping trolley reminds me once again of The Residents, who posed with a shopping cart for The Commercial Single in 1980 (and also used them in the Vileness Fats movie before that). Perkins is one of many Residents collaborators, and with the numerous Preserved editions of the Residents back catalogue I’ve been buying regularly, I was hoping the name of Perkins might show up a bit more in the credits, especially in The Mole Box. It doesn’t quite work like that of course as The Residents are still intent on preserving their myth of not having an identity. From 6th September 2019.