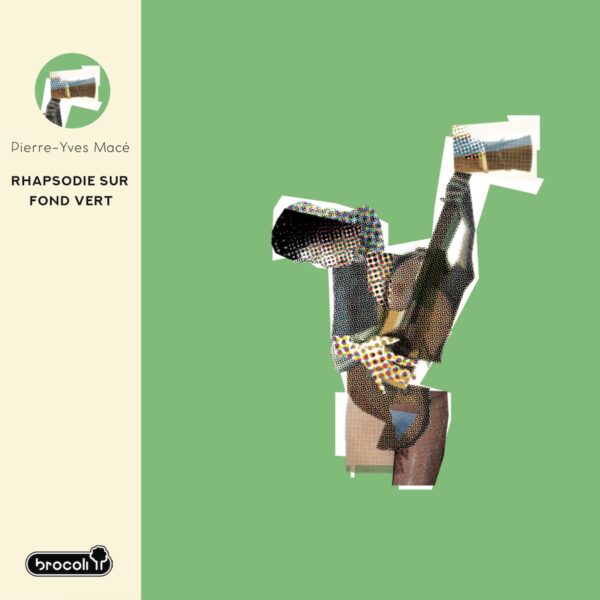 Very impressed with the set Rhapsodie Sur Fond Vert (BROCOLI 025) by the French composer Pierre-Yves Macé. He hasn’t crossed our steeple perch too often in the past, but in our 18th print issue we did note the unusual sampling-type record Passageneweg which he made for this label in 2008. By combining urban field recordings with old French chanson, he conjured up a comforting view of a semi-imagined genteel period in French history, probably a time when Satie stalked the earth like a straw-hatted colossus and cafe society was thriving with many a slice of Battenberg on the side.

Today’s offering is quite a different package and displays many aspects of Macé compositional abilities, to say nothing of his imaginative reach. There’s something quite opaque about all of these pieces and their structure, content and stylistic endeavour doesn’t make itself immediately obvious at all, so future listening delves are guaranteed to reap many rewards. Some of the music features real instruments, some of it is electro-acoustic composition, and at least three of the pieces were used as dance scores, for artistes such as Anne Collod and Marinette Dozeville. It’s also touching and fitting that one of the pieces is dedicated to his father, the rather wistful and moving closing pieces ‘Finis Terrae’, as it reminds us that the whole album is informed by a strange sense of world-weary experience and general melancholy. These are affecting emotions, and the composer has worked hard to “own” them.

I suppose the two main pieces are the title track, and the ‘Finsteren Zeiten’ piece near the end of the record. ‘Rhapsodie Sur Fond Vert’ I like because of its unpredictable structure, and if Macé 2019-style is laying out his stall for the current state of his mind, it’s a real cabinet of curios for sure. The field recordings of Jeanne Robet are part of it, as is the ‘speaking cello’ of Maitane Sebastian, but the star of this show is its episodic nature and the gentle but insistent use of changing layers, electronic effects, and slightly wayward trajectory. It’s a prime example of this album’s strong points, the opacity and the richness of content as mentioned; it’s not just about studio technique for its own sake, which is the problem with too much modern electro-acoustic classical material. As to ‘Finsteren Zeiten’, this makes use of an archival 1953 recording of Bertolt Brecht reading a poem while musicians contribute bittersweet chamber music from cello, viola, and piccolo; it’s probably the most moving piece on the whole record, though I’m at a loss to account for why. Again, the layers shift around and move in interesting cross-cutting directions, yet there’s an underlying coherence that makes it a compelling listen.

One could mention some of the other short tracks as gems of brevity and invention, but for now I’ll just single out ‘Nénuphars’, as five minutes of delicious mystery done with piano samples, an alto flute, and possibly other foreign bodies; seamless editing, uncluttered technique, and many other things to admire, but what I’m sensating on tonight’s spin is just the gorgeous oddness of it as a piece of music. It’s been a while since “modernism” has managed to appear to me so alien and yet so intriguing, all at once. Pierre-Yves Macé appears to have been quite abstemious in terms of his releases, and hasn’t been heard on record since 2013’s Segments Et Apostilles on the Tzadik label. I think I will need to investigate that. This, from 9th September 2019; recommended.