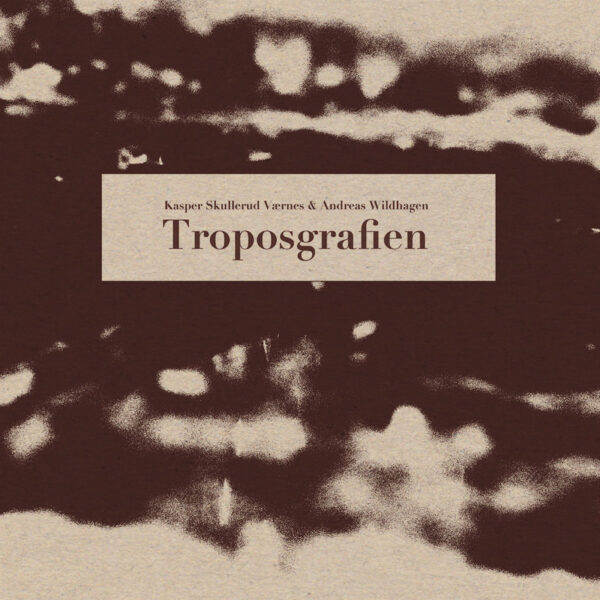 Apparently these guys have been a duo since 2008 – although this is only the first official product issued by the pair – Kaspar Vaernes (son of guitarist Knut Vaernes) plays alto tenor and soprano saxophone while Andreas Wildhagen drums on this cracking session whom someone had the presence of mind to arrange to be recorded professionally during a rehearsal period in august 2016 at Oslo’s Norwegian Academy of Music. Both players have previously worked with Paal Nilssen-Love’s Large Unit and KNYST! – a trio with Nakama label founder Christian Meaas Svendson. The press release for Troposgrafien states that “…most of the music is made up on the spot…” The intriguing title, Troposgrafien, may be a mashing together of “tropical” and “topography”. Okay great – so far, so good.

The first two pieces of impressive, unrestrained improvisation – “Jord og muld” and “Magma” – are suitably unfettered without being unmusical; judging by his melodic phrasing, Vaernes is clearly well-schooled in the history of post-war jazz as well as enthusiastically immersed in free blowing; Wildhagen is a powerfully uninhibited drummer – particularly on “Magma” where his toms are thunderous – and all is as it should be. Wildhagen’s playing is relentless here, Vaernes sprays his runs at full-throttle; the duo give no quarter.

On “Odet”, the third piece however, the duo present a sudden change of pace. More like a delicate soundscape than a workout, Vaernes and Wildhagen are in a contemplative mood here. Vaernes plays a fragmented lullaby to himself while Wildhagen agitates a selection of hand percussion. “Skysoveren” starts in a similar mood, but then quickly becomes more animated. Unable to restrain themselves, they’re back to free-jazz blat in double-quick time. In a display of complete and total abandon, the final piece, “Grus gjennom luft”, is an all out assault on the senses.

It seems to me that the ten-year period of gestation that produced Troposgrafien could be seen as a necessary amount of time for the duo to develop its “…highly flexible and telepathic interplay…” and in such an unrushed environment where “…impulses and ideas are explored with a common set of core values…” This is according to the press release that accompanies this disc; exactly what that “common set of core values” are is not stated, regrettably.

Also released in lp vinyl format and as a download. Interestingly, the label Nakama is named after a group on its roster featuring Andreas Wildhagen. Nakama – the label – seem to make it their policy to issue each title on vinyl lp as well as cd which is great news for all you wax-curious audiophiles out there.