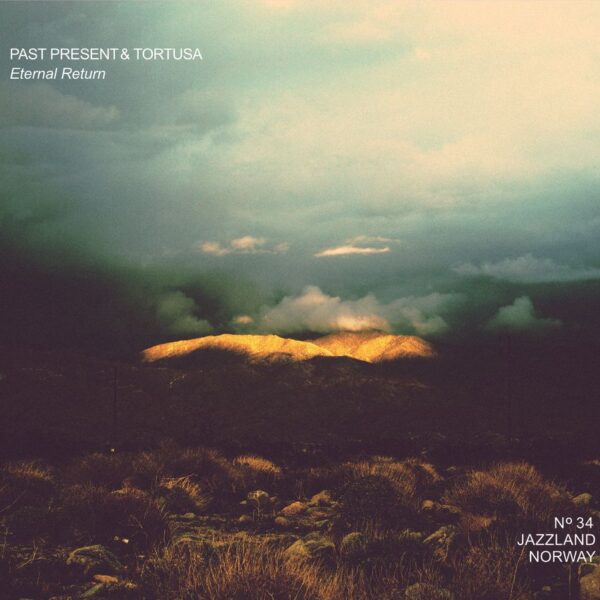 Drifty meandery music in the ambient mode from Norway, played by three musicians on the album Eternal Return (JAZZLAND RECORDINGS No 34) …calling themselves Past Present & Tortusa, this is the trumpet player Simen Kiil Halvorsen, bassist Alexander Hoholm, and the electronica musician Tortusa who is credited with “live sampling”.

The trumpet and bass player almost work their way towards some form of minimal, pared-down “jazz” with their playing, but it’s only barely recognisable as fitting even that loose profile, and it’s better just to surrender to the flow of this wistful stream of material and enjoy it as vaguely melancholy instrumental noodlings, with a sentimental edge. Tortusa in particular seems the part of the threesome who’s pushing the work towards the Candy Mountain of ambient peppermint canes. On the other hand, these three long-form ditties, shapeless as they may be, do manage to exert a certain fascination in their bleakness and wiry pull. This may have something to do with the attempt being made to tell a story, as they call it “a dystopian tale told in three chapters”.

Maybe it’s my own turn of mind, but my preference is for the middle chapter called ‘Black Mist’, which is the least sanguine and most bleak of the three, where all seems lost and mankind wanders in a perpetual despairing fog of emptiness. There’s a real emotion going down in these 8 mins and 20 secs, which our three Nordic types have evidently felt and lived through, before settling down into the studio saucepan. So ‘Dawn Of Hope’ is all very well, and while the rising sun conjured up by the music may be bright and optimistic, I spurn the sentimentality of these musical tones with ripostes of pure bile. Then again, trumpeter Halvorsen is evidently trying to offer his 21st-century improvement on Miles’ ‘He Loved Him Madly’ with his forlorn and studio-enhanced sound, squeezing out rueful and breathy tones before calling for a box of hankies to cry into.

Everyone else may prefer the perplexing structure of ‘Nowhere’, which opens the album and moves incredibly slowly down two pathways for 21:02 mins. You could easily divide it in two – the twee drone at the start, followed by the creepy minimalist jazz-not rumblings. It’s during this section that bassist Hoholm shines best for me. He seems much less glib than the other two players, and finds it genuinely hard to express himself without stumbling over his own phrases, as if his sentences were tumbling out of his mouth in ungainly lumps of clay. Such a man I know I can trust, rather than a silver-tongued crow, no matter what flattery he may exude.

There’s a booklet of colour photos of amazing landscapes and views of the earth that stir the soul, which may have been the work of Tortusa (he did the cover). Simen Kiil Halvorsen also plays in the Bjergsted Jazz Ensemble, Hoholm plays in Chapter 8, the Rastko Obradovic Quartet, and the Trond Kallevåg Hansen Trio, which are all Norwegian jazz groups; Tortusa, who is John Derek Bishop, has other ambient-electronica discs on this Jazzland label. From around 19 September 2019.