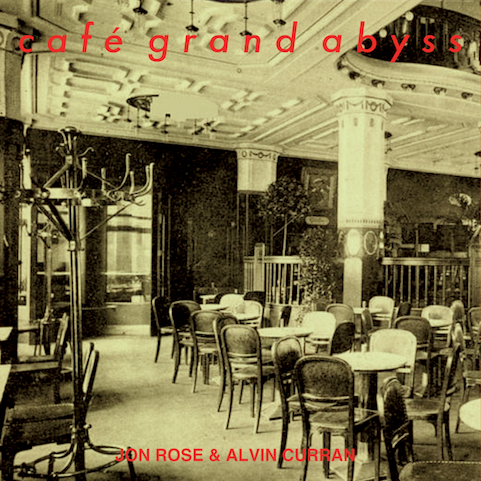 On Café Grand Abyss (RER MEGACORP ReRJRAC), we have the somewhat unexpected team-up of two authentic veteran maverick types – Jon Rose and Alvin Curran. They did it over a couple of sessions in Rome and Sydney, Curran playing his piano and sampler and Rose bowing not just his violin, but also the musical saw on one track and even a drainpipe equipped with strings on another. Café Grand Abyss is exceptionally dense, maximal, busy, lively – more than once the term “hypermusic” crossed my mind while listening to this opaque and buzzy fabric of crisp tones and clusters of notes, offering more atoms per molecule than the average multi-cloned being from Dimension X. But then I also remembered that Jon Rose once did something called the “Hyperstring” project which resulted in at least one recording for ReR.

At one level, you could characterise the music on Café Grand Abyss as a form of souped-up chamber music, with atonal piano runs inflected with free jazz moves plus 12-tone strings attacking the face of the listener with all the fury of a swarm of Darmstadt bees, but then we also have to account for the loopy samples thrown in by Curran, which add electronic noise, wayward drumbeats, and startling voice segments into the cauldron. Curran has been letting himself loose on sampler technology for a while now – one notable benchmark is the record he made for Rossbin in 2003 called Our Ur, with Domenico Sciajno. Thankfully he doesn’t overdo the technology accelerator pedal on this occasion and the firework-box of delights has the lid firmly attached and locked, allowing him to dip in as needed. Curran has produced some amazing work in the last 20 years or so. I remain personally enamoured of Lost Marbles, an all-over-the-plaza release for Tzadik for 2004, which managed to remain respectful of classical traditions while at the same time overturning all expectations with its bold experimentation.

That same boldness is here today, sans doute; the music here is just too downright impolite and self-assured to be mistaken for contemporary improvised music, a field which sometimes seems too mired in its own self-importance and stifling traditions. I’d also say in Curran’s favour that although he was a founder member of that extremely important 1960s group MEV, he doesn’t keep on reminding us of that fact, unlike some diehards who want to wish themselves back to the glory days of 1966 when it was possible to startle the audience with the shock of new music. Rose, meanwhile, has usually exhausted and exasperated me on record; I frankly own that it’s very hard for me to keep up with him. But this release may be the jolt of vitamin B+ which I need to bring me to my senses. Not only is the energy here, and the high-speed and high density, but there’s a coherence in the playing which amounts to a reasoned line of argument, something a fellow can engage with.

Perhaps Café Grand Abyss really does represent that which so many musicians aim for, a meaningful musical conversation. In respect of that, it might be worth mentioning that (as indicated by the press notes), both players have a time in their past when they played commercial music for what is euphemistically called the “industry”. If I’m correctly understanding Curran’s layered and cryptic response to the question, he has worked as a cocktail pianist at one time. Rose, meanwhile, had an interesting time in 1970s Sydney playing in a club where he was called on to perform anything from film music to soul and play beat music for the exotic dancers. It remains to mention the intellectualised titles to some of these pieces, such as ‘Adorno’s Boiled Egg’, ‘Marx On Safari’ and ‘The Marcuse Problem’, which allude playfully to various influential thinkers of the 19th and 20th centuries. Sheesh, can you imagine having breakfast with these two?! From 18th September 2019.