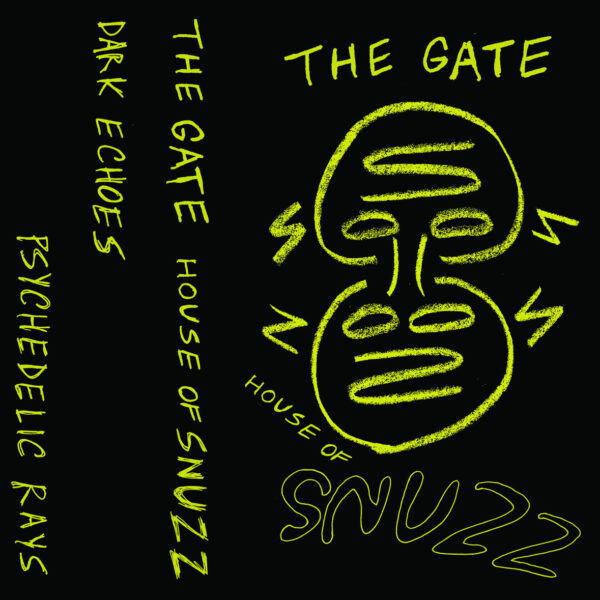 Dan Peck cassettes are always welcome at my door. This one is the latest album by The Gate, his doom-jazz trio where Peck plays the tuba and is joined by worthy constituents Tom Blancarte and Brian Osborne, playing acoustic bass and drums respectively. House Of Snuzz (TUBAPEDE RECORDS #13) was recorded on a European tour in 2018 at a venue in Denmark, and there’s also a video promo short film directed by Dan Peck, which I haven’t yet seen.

Previous releases by The Gate have been real sludge-hammers, juggernauts of incredibly heavy noise-sound that tended to flatten the listener like a steam-roller; the trio may have been trying to prove something about making bass-heavy, low-end noise in an all-acoustic fashion and were evidently keen to exhibit a love for doom metal. House Of Snuzz shows real development though, and while it still satisfies mightily on the lower-register lung-vibrational tonometer, there’s more articulation in all the playing, especially from the upright bass and the tuba lines. The second track in particular shows more jazz and free-jazz influences than we’ve been able to detect previously.

The other “new” aspect is the tinges of mind-warping psychedelia that are being tossed into the fishpan. One instrument – I think it’s the tuba – is being treated live on stage with a processing device that rethinks its output as acid-fried, nightmarish freeform scree, producing digital overtones and weird harmonics that should not be. This happens on ‘Psychedelic Rays’, and it’s this track in particular that makes me wish for an alternative universe where The Gate could have jammed with Butthole Surfers in 1989 on a tiny stage in Austin. The combination of this music with the old Gibbytronix (Gibby Haynes jabbering through an insane echo and loop device) would have been pretty mind-shattering! ‘Dark Echoes’, the first track, is a fine piece of metallic menace that we can recommend to all music-lovers who want to enjoy a slowed-down deep-frozen version of Black Sabbath crossed with the complex, layered tones of an Ivo Malec. So another alternative universe fantasy to add to my wishlist would be to hear Dan Peck playing in a group led by Iancu Dumitrescu, which would result in intense deep cosmic drones for sure.