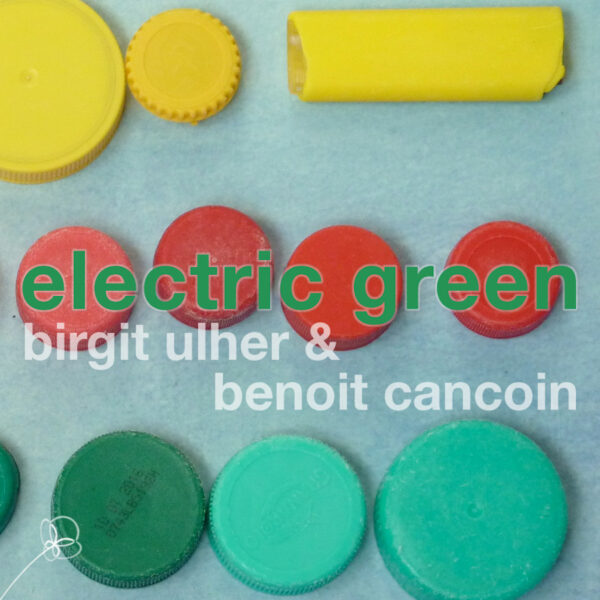 Minimalist player Birgit Ulher seems to thrive in the duo situation for her unique trumpet and radio set-up. She did it in 2018 on Tulpe Schicht Brille with Christoph Schiller, and with Ute Wassermann on the excellent Radio Tweet album in 2015. Today’s slice of minimal pastry is called Electric Green (BLUMLEIN RECORDS) and it features Ulher playing her trumpet, radio, speakers and objects along with the double bass playing of Benoit Cancoin. Cancoin has been associated with free improvisation since around 1995, and I’d like to think this team-up represents part of a growing trend where the extreme reduced-mode players like Ulher are getting back to the idea that it’s OK to rediscover the roots of this mode of music as expressed in wild performances from the 1960s and 1970s on FMP and ICP, but in reality there is no such trend.

Even so Electric Green is a taut little groovester. Cancoin has a nice line in bowing that upright double bass and sometimes producing obscure but irresistible little rhythms that are capable of chugging the performance into the middle of midnight. If you like that feeling of “transport”, then the bass on track three ‘Tenne’ is exactly like the wheels of a steam engine while Birgit lets off gentle puffs of steam from the improvisatory boiler. However, the duo seem more at home in the slow and exploratory mode, and the snaily mode of pieces like ‘Karmesin’ hang heavy with the emotions of melancholy and triste gloom; ‘Aureolin; is likewise pretty introspective, with rueful and angsty tones from both players denoting a certain regret.

For latter half of album, we enter mystery turf with growlers like ‘Seladon’, a zone of tension if ever there was; plocs and thocks from the bass, low snarls from the fierce trumpet, and lots of natural echo to simulate that feeling of being locked in the mental dungeon of ambiguity. As for the title track ‘Electric Green’, even more tension and paranoia, bordering on a psychotic state; long form tones are used to sustain this continual state of expectancy, and these washed-out drones are laced with acidic, sullen moods. For some reason this album is giving me the aura of one of the more “emotional” sets that Ulher has puffed on, and for once I don’t feel I was being asked to pay attention to the radio and speaker set-up. If this means that the music’s essence is prevailing over the technique, then I welcome that development.

The odd front cover image turns out to be plastic bottle caps, arranged in rows by colour, photographed by Birgit. At first I thought it was coloured pastries and macaroon shells in the world’s tidiest bakery. From 27th September 2019.