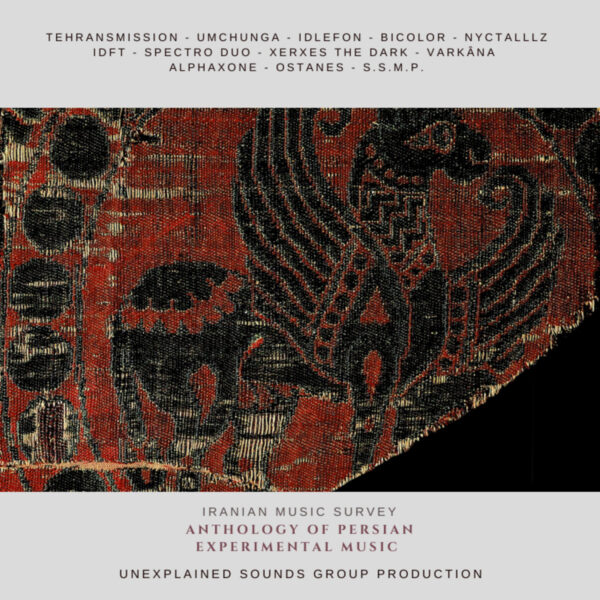 First released in digital format in 2016, this survey of the experimental / alternative / dark ambient Iranian music scene, mostly covering artists based in the capital Tehran, finally has a physical outing on CD digipak with a new cover. The music ranges through dark ambient, drone, experimental, improvised, minimalist, musique concrète, light psychedelic guitar rock and sound art, some of it featuring Persian folk music elements. First cab off the rank is an electronic / folk fusion noise drone work appropriately “Leaving the Planet” by Tehransmission: mostly sharp, dissonant and jangly, this cold piece takes an unexpected turn into a moody wormhole detour of sepia-tinged found-sound nostalgia. Umchunga’s “Turbulence I” maintains a cold darkspace ambient theme with a crumbly electronic edge, jittery drones and frosty background shimmer. The track goes rather bleary-blarey as it continues, which rather spoils the atmosphere but the layers of electronic sounds are very crisp and frizzly. Subsequent tracks continue with a droning dark ambient / noise edge, relying on rhythm, repetition and layering of sharp or edgy noise textures and/or sound samples to achieve particular moods and atmospheres, nearly all of which tend to be gloomy, foreboding or pessimistic, or some combination of the three adjectives.

As the album continues, the music becomes darker and less earth-bound with Spectro Duo’s “Lajevard – Excerpt 2” and Xerxes the Dark’s mysterious electro-ambient “Xtraterrestrial” among the stand-out tracks in the middle of the recording. The last couple of tracks round off a mostly tasteful selection of space-ambient soundscape pieces with restful droning ambiences, warm keyboard wash and cute bleepy-bloopy electronic tones and melodies.

Most tracks are very good and very original (early tracks up to and including track 5 form a solid bloc of strong experimentation with sounds, textures and samples) with interesting sounds and sonic textures, conjuring up a variety of moods and atmospheres at the gloomy end of the emotional range. It must be said though that very few tracks actually refer to their creators’ home cities or towns, or Tehran: the tracks feature no vocals and there are no found sound recordings of Iranian urban or rural life, even if distorted. (Possibly the artists did not want to run afoul of government or security authorities recording snippets of everyday communal urban life.) Listeners not knowing the origins of the artists would be hard put to place them anywhere on the planet. With an emphasis on Tehran-based artists, the anthology may be rather less representative of Iranian experimental music than the title suggests. Music drawing on particular folk or contemporary pop styles associated with parts of the country outside the major cities and which may be challenging and adventurous in their own right, but which don’t necessarily conform to Western stereotypes or expectations of “experimental music” may be getting short shrift.

While individual artists are very good, and several tracks can hold listeners spellbound with unusual and arresting combinations of sounds, textures and rhythms, as a whole the anthology doesn’t really jump out of the ocean of similar anthologies of experimental music that I have heard from other regions of the world. Perhaps if all of these surveys paid less attention to what Western audiences expect from “experimental music” and presented music that reflects the life and experiences of musicians and non-musicians in the areas they survey, there might truly be experimental music.