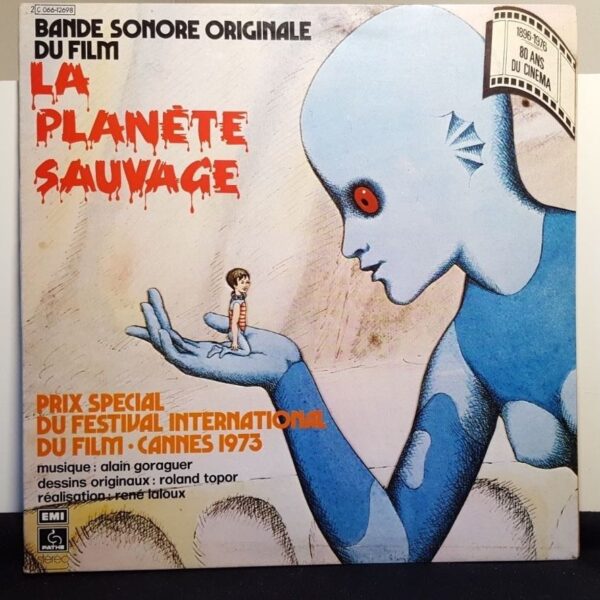 Recent news I heard that this famous soundtrack to the 1973 animated cult classic science fiction film “La Planète sauvage” (also known as “Fantastic Planet”) by René Laloux may be reissued in April 2020 on yellow vinyl prompted me to hunt down the soundtrack on Youtube and Bandcamp. I’ve seen the film years ago and, to be honest, at the time I hadn’t been very impressed by the music at all – the visual imagery, even the background animation, with their erotic undertones and insinuations, and the plot itself of an underclass of tiny people called Oms gaining enlightenment and education, by which means they overthrow their giant Draag oppressors and eventually compel them to treat them as equals, with the result that the Draags and Oms finally achieve true piece, were much more compelling. On its own though, with its mix of moody jazz and funk, psychedelic rock pop, space-age synthesiser lounge music, various special effects and 1970s twangy guitar licks, this soundtrack is very much of its time, free and liable to go off on breezy tangents, resulting in unpredictable and quirky music. At times it has a pensive mood and in its own way is quite hypnotic. Listeners wouldn’t be able to tie any part of this soundtrack to particular parts of the movie unless they have seen the film together with the soundtrack.

The soundtrack’s entire playing time is half that of the film itself – this means that much of the film has no musical accompaniment – but nevertheless listening to the entire soundtrack in one go is worthwhile to be immersed in trippy melodic mood music of nearly 50 years ago. The music hasn’t lasted the passage of time all that well but the same could be said of much of the film’s animation which looks a curious cross between the collage animations of Terry Gilliam for the old 1970s Monty Python television series and the psychedelic rock album cover art of graphic design groups like Hipgnosis. Even so, it obviously has its attractions, as it has been sampled by many artists, especially hiphop artists, over the years. Probably the best parts of the soundtrack are those sections where atmospheric sound effects dominate but those are few and far between.

Alain Goraguer (born 1931) is a French jazz pianist best known for his collaborations with famous French louche singer Serge Gainsbourg (father of the actress Charlotte Gainsbourg) who was at his most active from the early 1960s to the mid-1980s; and for scoring movie soundtracks, beginning with “La Planète Sauvage” in 1973 and continuing from there, hitting a career peak in the 1980s and 1990s.