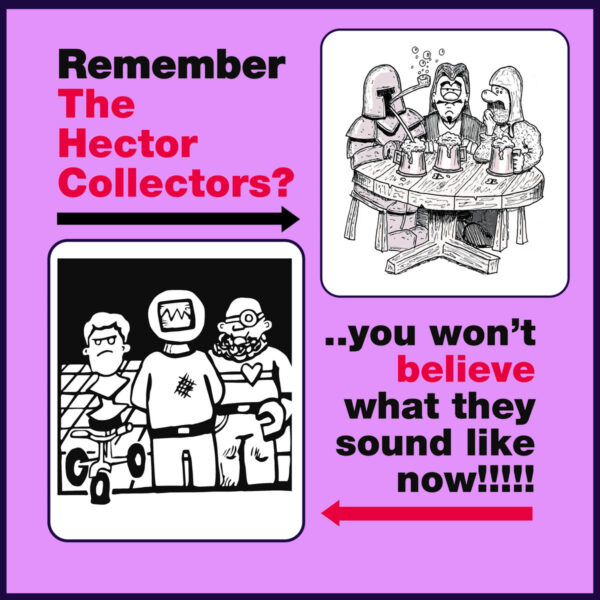 Oddity of the day is this LP from The Hector Collectors, released on the Puzzled Aardvark label with a wacky cartoon cover. Adam Smith and I.D. Smith are the singer and guitarist in this indie-pop band, accompanied by bassist Joseph Greatorex and drummer Gavin Dunbar. The LP Remember The Hector Collectors (PUZZLED AARDVARK PAPLP3) is a set of upbeat jingle-jangle indie-pop tunes, which reminds me of bands like Orange Juice or The Wedding Present or Half Man Half Biscuit, although in places the rhythm section evidently think they’re about to join The Fall (from around the period of Grotesque), and the singer professes to be keen on Bogshed.

Quite a few 1980s / John Peel show bands in that list, and these songs don’t do a great deal to advance out of that particular nostalgic vibe, apart from the fact that they’re all about something we didn’t have in the 1980s – the internet. Yes, Adam describes the LP as “a loose concept work about the online culture of the mid to late 2010s”, and as such we have songs called ‘Abandoned Website’ or ‘Content Farm’, and lyrics that refer to such hot topics as online bullying, mindlessly adding likes on Facebook (‘Just Lovely’), ganging up on people on forums and chatrooms (‘The Ad Hominem’), and response videos. All of these are serious and touchy subjects, and it’s good to hear someone conscientious enough to have a tilt at addressing them through song; many of these themes point to conflict and argument, and the way that social media generally has in fact proven to be a breeding ground for making disagreements even worse than they already are, failing to provide a suitable mechanism for reasoned debate. All we need to complete the set is a song about “flaming” emails, but I expect that’s old hat by now.

Full marks for the sentiment, but the style and manner in which The Hector Collectors address these topics is rather unsatisfactory. The jolly, upbeat mode of each song seems quite at odds with the subject matter; the band play every song with the reckless tilt of ‘Container Drivers’, and the singer has an audible grin on his face as he throws out his barbs between clenched teeth. I appreciate it’s probably intended to be satirical, but the humour seems forced, and a bit broad. Adam Smith is good with words, but blunts his meaning by using too many of them, producing phrases that are more convoluted than an Elvis Costello verse. And if they’re serious about playing pop music, this band need to learn the value of concision; too many songs are overlong by several verses and a chorus, and could use brevity to make their points sooner. The opening song alone hammers its point into the ground through an excess of verbiage, with added verses that do nothing to advance the point of the song. Not a completely worthless record, but I’m afraid I soon grew weary of its prolix and extroverted surface, its stodgy blokeish tone. The label is also home to a Scots band called Colin’s Godson, in which Greatorex plays. From 11th September 2019.