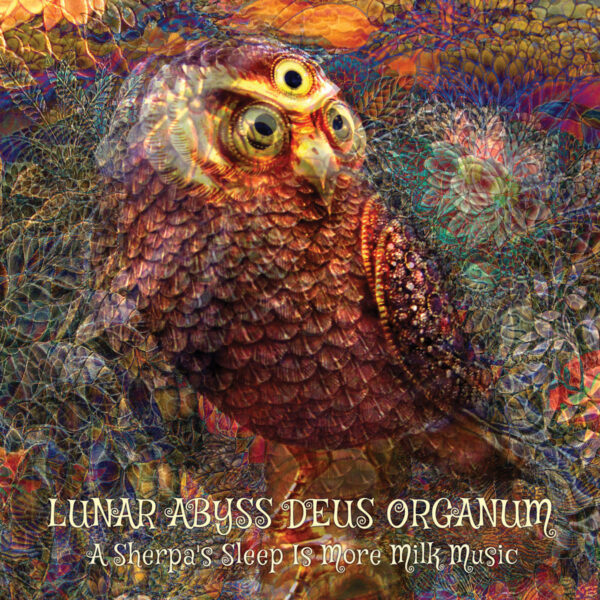 Happy to be known as L.A.D.O., the artist behind this electronic dark ambient project (Evgeny Savenko to his family and friends) claims to have been inspired by a dream, and much of the music and sounds here, their associations sonic, visual and other, and imagery are also apparently derived from moments of drowsiness and other states of semi-consciousness. The resulting album seems more organised and structured, and is quite easy to follow and digest, than its origins and inspirations might have suggested. Relying on field recordings and nature-based background ambience as much as on layers of analogue synthesisers and electronic instruments, and the call signs of radio stations, the music does indeed appear very organic, spontaneously rising up as it does from a hidden universe that exists in parallel with ours, and of which we are usually unaware. The layering of sounds and their increasing complexity and intensity give the music its “structure” and direction. While it’s not necessarily bright or bubbly music, neither can it be called dark in the sense of being foreboding or sinister, though the mood and emotion do veer a little towards the shadowy side of the emotional range.

Opening track “Crimsky” is a beguiling piece of sighing tones, occasional distant birdsong and shifting atmosphere, setting the stage for the ringing drones and rollicking knuckle-bone percussion of “Kanikuly”, reminiscent of some festival or ceremony taking place in a distant exotic location. Rhythmic background sounds that include crowd noises and the constant whistling rubbing cricket sounds add a hypnotic ritual effect. This can be a shrill and monotonous track but it’s the very monotony that makes the music intense and immersive. Halfway through the track breaks away from the drone (though it still continues in the distance) and concentrates on sounds of nature and other fragments of noise that hitherto had been secondary to the groaning ceremonial spectacle.

After a relatively straightforward third short electronic track featuring baby noises, we’re back to layered ambient business as usual with “Zazemlya”, featuring guest musician Tanith: this is a tapestry of melodies, drone wash and nature field recordings, bound together by the moods, emotions and atmospheres arising from the juxtaposition of the different pieces of source material. The result is lush and intriguing: a spirit world behind the bird calls, the shimmering washes of tone and tingling bells is close by, possibly even reaching out to us on the material plane, but not quite succeeding. As on previous long tracks, the music becomes denser, busier and (in its last four minutes) more frantic and urgent as it continues, then (right near the end) comes to a calm, spiritual resolution. “Pozdravlenija” (“Felicitations”) is a long droning work with a celebratory though solemn mood.

The album divides into two parts joined by an interlude and each part may be commenting on the other in a narrative referencing a journey of a shaman from the material world to the spirit world and back with a message from the ancestors. Some listeners perhaps may feel that all tracks could have been edited for length: there are parts that are certainly monotonous and which test the listener’s patience and endurance, but ritual and shaman-based music answers to a call higher than itself and certainly beyond the material comforts of human beings. I certainly found parts of the recording, especially tracks 1 and 4, very mysterious and intriguing. The other tracks have something of a voyeuristic touristy feel and veer close to kitsch New Age ethno-ambient camp at times, even though the artist behind the project may be genuinely keen and sympathetic towards shamanism as a way of life and experience of reality.

Based in St Petersburg (I think), Savenko is a prolific musician who has released several albums and collaborated with other artists under the L.A.D.O. project name and other related Lunar Abyss projects.