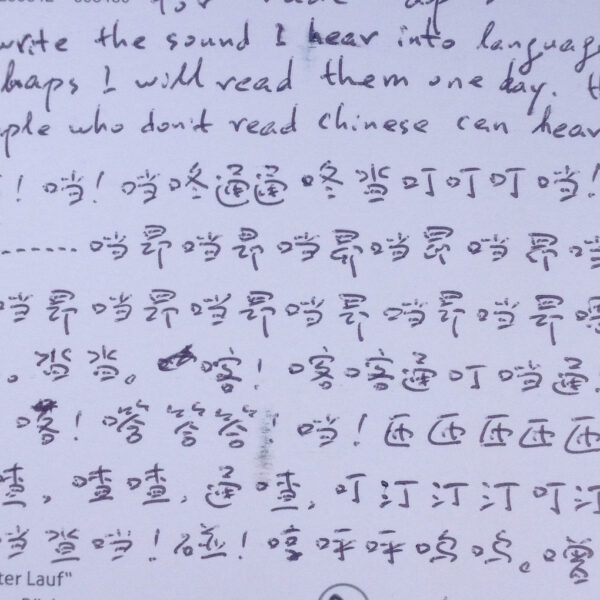 Yan Jun is the Chinese musician, writer and poet who works with in field recordings, improvisation, and feedback noise. I think he co-compiled a compilation of Chinese experimental music in 2017, and in 2009 he supplied the notes to the four-CD survey put out by Sub Rosa. Well, he’s also a subscriber to Anne-F Jacques’ tape label Crustacés Tapes in Montreal, and reveals that he sent her a bunch of postcards in 2016 and 2017 – which is the correct way to “purchase” tapes from this very unusual label. This began a process which led to the production of Postcards (CRUSTACÉS TAPES #11), a nifty cassette we now have in our hands.

On it, a number of contemporary players interpret and perform the compositions of Yan Jun. Nicholas Bussmann does field recordings from the street followed by inexplicable vocal sounds. Bonnie Jones, the Korean-American who plays in English, gives us minimal night-time hissing with very distant musical sounds from a far-off record player. Zhu Wenbo’s field recording is so enigmatic, he won’t give it a title. There’s also Torturing Nurse, forsaking their usual extreme noise antics in favour of yet another slice-of-life documentary recording from the streets with some highly unusual details. Yes, so far a lot of phonography on this cassette, but it’s intriguing and interesting, and conjures up the same sort of vibe we used to get from the “travelogue” styled tapes of Rinus van Alebeek.

The story of Postcards is that Yan Jun was so moved by what he heard on the Crustacés Tapes that he started to write down Chinese characters that expressed sound in a descriptive manner. “I supposed she doesn’t read Chinese,” is his account of this situation, “then they would remain mysterious”. Anne-F suggested this piece of mail-art poetry could be developed into a set of compositions, and that’s exactly what Yan Jun delivered. On the B-side we get a little more performance-type material, as Seijiro Murayama (the famed drummer who’s played with Keiji Haino, Fred Frith and KK Null) describes a ‘Holiday In Paris’ through long humming tones emitted from his mouth. Ryu Hankil’s oddball percussion and synth piece is fantastic, but sadly less than 60 seconds long. (Ryu played on that ace 2-CD set Foreign Correspondents). Sound Of The Mountain (from Canada) are my latest favourite thing in the world. A duo who play trumpet and clarinet and emphasise their breathing actions, they play ‘Postcard Piece #4’ in gorgeous accumulated balloon-oh sounds with some overheard conversation dropping in and out which makes it pure magic. And there’s Sun Wei with another street-scene recording where the car engines are the natural droning resonators and footsteps are the percussive beats, providing natural musical backdrops to more eavesdropping situations and snatches of tense situations.

Postcards is a real grower and another endearing item from this great small label. From 21ist October 2019.