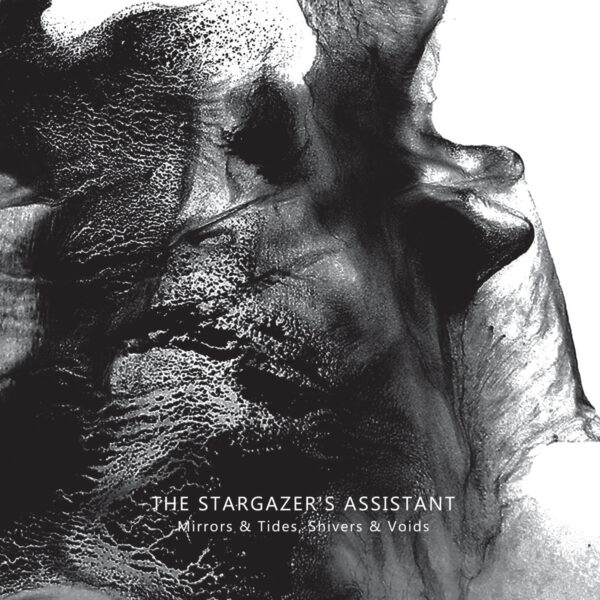 Originally released as a double 10″ vinyl recording by the American label Utech Records back in 2013, this work by the wonderfully named The Stargazer’s Assistant is now enjoying a new lease of life as a CD on Poland’s Zoharum label. Brainchild project of UK band Guapo percussionist David J Smith, The Stargazer’s Assistant (hereafter referred to as TSA) allows Smith to play different instruments and incorporate found sounds and samples into a style of music embracing dark atmosphere, post-industrial ambient and a strong nostalgic feel. The CD combines two separate EPs, “Mirrors & Tides” and a reissue from 2008 “Shivers & Voids”.

Clocking in at just over 17 minutes, opener “Coral Butterfly” easily dominates the rest of the recording with its tapestry of heavily redolent tinny industrial-lite atmospheric nostalgia, in which treated piano and synth drone wash lead listeners through a watery dream-like soundscape before unexpectedly tipping them all into another world in which guest singer Mika Rättö and Smith himself weave a hypnotic web of reverberating multi-tracked voices amongst circling sounds of bells and melodies in a strange water-world dream. The mood seems friendly yet a little remote and pensive, as if Rättö and Smith are singing more for themselves, reminding themselves of what once was, before it all disappears, and the track escalates into an imposing edifice that gives every indication of crashing apart any minute. Compared to the opening track, the title piece seems but a footnote, a brooding little coda with a repeating keyboard motif that also grows in volume and intensity towards a climax that may be quite dark – yet fades out before it reaches its goal. “Secret Kingdom of the Swift” concludes the “Mirrors & Tides” set with a brisk and very business-like percussion-heavy rhythm piece that includes an organ drone, tinkling fairy-box tones and a set of bells. This track is highly entertaining in its tunes, resonant sounds and catchy rhythms, and sweeping in its atmospheres and moods as synth drones take over the track and transport it to intergalactic vistas.

The pieces on the “Shivers & Void” set present another cinematic soundtrack limning the outlines of a dark and impenetrable, even sinister forest kingdom. Birdsong and quiet insect calls flit in a secret shadow world in “Night Soil” for the first few minutes before, just like “Coral Butterfly”, the track suddenly drops listeners into King Kong territory with a woman’s scream. The rest of the music proceeds to advance steadily at an even keel, neither dimming nor turning up the glare, to its conclusion. By contrast the title track seems a static repetitive filler piece in spite of its beguiling sounds. Bringing up the rear is “The Dream Kingdom”, a relaxing lush instrumental with just the hint of something a little dark, sinister and martial in the background that steadily grows and comes to dominate the track.

Perhaps this recording of atmospheric cinematic soundscapes detailing among other things a watery universe of singing mermaids and mermen, and a mysterious forest world, isn’t quite as consistent as it could be but even the minor monotonous tracks stuck on autopilot looping can be interesting. The longer tracks, “Coral Butterfly” especially, are what makes this CD reissue worthwhile hearing, with their intimations of worlds behind their layers of tone and sound, and their distinct atmospheres, seeming much larger, intricate and complex than they really are.