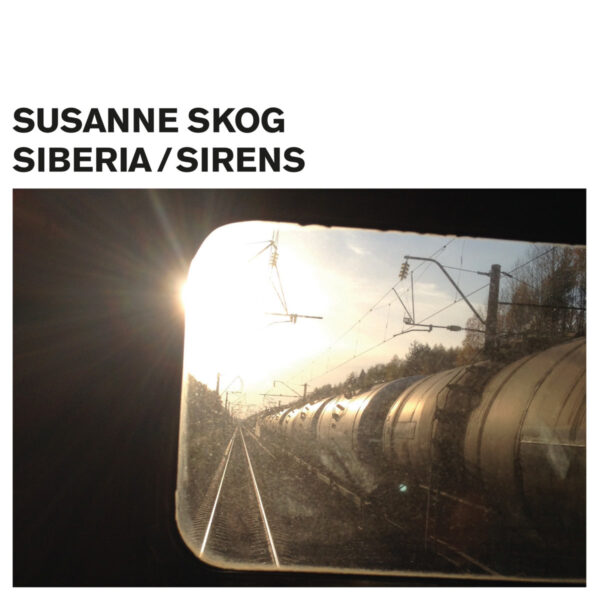 Susanne Skog‘s a mover and shaker in Stockholm when it comes to the avant arts, though hasn’t been widely represented on record with her ideas barring fleeting appearances on the Radio Territories book of 2007 and the Flyoop lock-groove novelty item from Fylkingen. This is now put right with the appearance of Siberia / Sirens (FYLKINGEN FYLP1043), two lengthy episodes of layered drone produced from field recordings in the stylish, interlocking way that they do so well in the EMS in dear old Sweden. The first of these. ‘Siberia’, was built up of recordings she made on a long train ride from Moscow to Vladivostock which apparently can take 205 hours to complete. This may be why some prefer to do the tourist thing and ride on the Moscow Imperial train, which may come with extra caviar and tea. Skog slowly generates a sinister drone from what I assume is the inside of a passenger compartment, recordings hopefully layered several hundred times over in the deep stomach of the trusty EMS synth banks. This may seem unengaging on paper, but sitting through it brings all the terror of a ride to the salt mines preceded by an interview with old “Papa Joe”. The subtlety of this composition is impressive, and unlike many more “static” drones that have emanated from contemporary electro-acousticers, ‘Siberia’ has a continual sense of forward-movement and dynamic speed. Well that may seem like a truism, but consider how often you’ve heard field recording works that are so badly conceived and put together they tend to subtract from the vitality of the very thing they propose to document, rather than enhance it; but not here. There’s 25:18 mins of train-ride sublimation right there in the sidecar.

For ‘Sirens’, Skog applies the layering thing to numerous recordings made of sirens from around the world, located in various parts of Japan, Europe and America. It took her – or somebody – four years of effort just to collect the recordings. The site-specificness of these sirens doesn’t seem too important to her, but the layering process sure is. Once again she applies the slow build and the slow burn; it’s pretty slow and torturous, every sinew and nerve ending tugged as the tension increases. Whereas the train piece allowed us to half-recognise something familiar buried in the blur of sound, this sirens item is 95% alien drone, semi-bleak yet beautiful visions of a world we hardly recognise. Compelling…we almost seem to be hearing a long drawn-out farewell to all human life, a massed howl of sirens for the end of the world. The fact that one of the sirens was recorded in Hiroshima brings added poignancy to the work.

Susanne Skog has recently been the chair of Flykingen and also ran the festival Sound Of Stockholm for four years, and the paucity of available recordings should not blind you to fact that she’s exhibited her sound art around the world at big-name events, venues, and pavilions. Apparently she came into this sphere of working from experimental radio and documentary. She’s also an arts journal editor, and in the 1990s worked on Bang magazine, a publication with feminist leanings (and hopefully a strong critique of society too) issued from Stockholm University. There’s an element of social engagement with this release and, I suppose, with all her documentary recordings gathered from her travels, which she refits and reshapes according to her own lights. Very high recommendation for this uncluttered, highly focused brace of intense aural statements. From 24th October 2019.