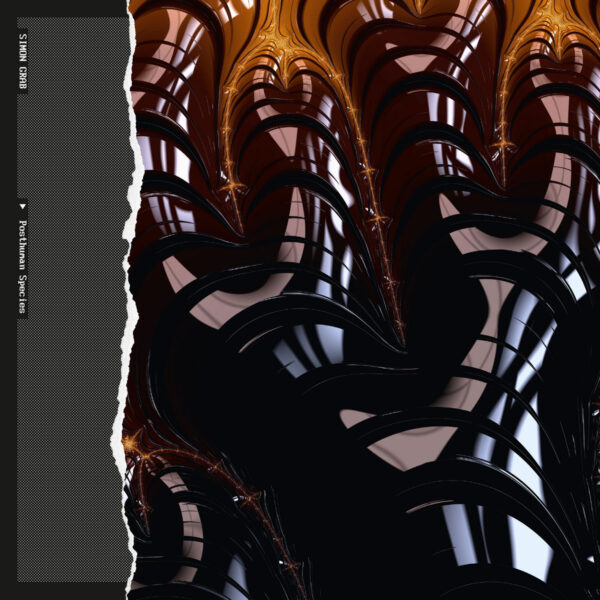 Excellent slab of electronica from Swiss manipulator Simon Grab on his Posthuman Species (-OUS OUS025) album…personally I very much enjoy the clipped phrasing, the no-nonsense and direct style of these abstract cyber-emissions, plus the downbeat mood which expresses a certain pessimistic tone without descending into implied violence or outright over-wrought gloomery. The music itself manifests aspects of techno, dub, noise, feedback and glitch, all of these styles and methods updated to suit Grab’s personal needs and desires, and all of them tailored to a highly minimal cut of the gib. What’s impressive at a technical level is that he achieves all this with a basic no-input mixing desk set-up, as pioneered in the art stakes by Toshimaru Nakamura, but evidently the NIMB is becoming much more of an accepted part of the shared tongue of your electro-geek mob these days.

The “theme” of the LP is less innovative, being a clutch of hackneyed science fiction dystopian tropes, mostly lifted from the early works of David Cronenberg; indeed some of Simon Grab’s track titles, such as ‘Biomechanoids’, ‘Neurotransmitters’ and ‘Neurochemical Behaviour’ could have been used for any given Cronenberg movie of the early 1980s, or at any rate express the subtext of such movies. To be fair, Grab doesn’t do much more than suggest the theme in a very oblique way – this isn’t a concept album in other words, and it creates a tense mood rather than spin a horrifying yarn about the rise of the “new flesh”.

Although I have a promo CD in my hands, the main release is on glorious vinyl cut to a high degree of perfection by Adi Fluck at Central Dubs. Those who purchase the digital download however, get an extra 15 mins of musical nerve-shredding in the form of track ‘Posthuman Wonderland’. All Numanoids should buy now and never be troubled by pesky emotional responses again. From 2nd October 2019.