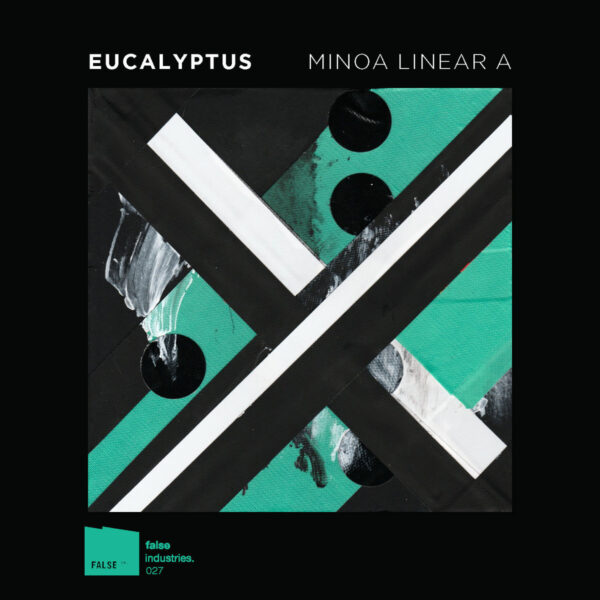 Many ambient-drone records we receive are the work of a solo act, some dribbek with a laptop processing digital sound files. In contrast to that, we have Eucalyptus, a four-piece of players from California with their album Minoa Linear A (FALSE INDUSTRIES False027). The quartet of Lay, Feekes, Ryckebosh and Hervey have been honing their craft for the last five years, improvising every day; it’s not clear what instruments they play to produce this lush drone, but it may be significant that they record direct to an old-school cassette deck, perhaps in pursuit of a nice “distant” effect in their surface sound. Nothing objectionable on these slow and sunlit grooves – I’m just puzzled as to why they (or their press agent) think it counts as shoegaze, psychedelic pop or noise rock, since this record hasn’t got a single rocking molecule in its entire gaseous body. The theme of Minoa Linear A is an evocation of an unknown and lovely America, a mysterious imaginary continent that can only be reached by way of “empty sideways”; it’s not inappropriate to think of the album as a road movie in sound. Part two of this epic drift-meander will be released next year, apparently. If open-ended ambiguity is what slices your aubergines, check in now. Available as a cassette. (24/10/2019)

Swiss experimenter Roland Bucher made the Viaje (HALLOW GROUND HG1905) LP working with his invention, the noise table. This is a device of his own making which he’s been developing for a good number of years, exploring the possibilities it affords him for making sounds in a live situation or in the recording studio. Actually it might be better to think of the table as a set-up rather than a single device; from what I can make out on YouTube, there are numerous separate aspects to the whole thing. On one side there’s the expected side-table with the laptop, numerous effects pedals and mixing desk; nearby, a couple of percussion instruments (snare drum and cymbal, miked up and ready for action). The noise table itself is a glass-topped slab lit from below, on which he moves around little objects as if he were playing a game of miniature ice-hockey. In short, this is pretty much noise produced through granular synthesis and filters, but its production is manipulated using a rather unorthodox free-form method, instead of the usual knob-twiddling. Five examples of Bucher’s resultant music are published on this LP. Subtle, not without interest, a lot of variety in the sounds; but very process-heavy. I liked the two short tracks on side two best, in preference to the two long pieces on the A side, which take too long to warm up and are beset by Bucher’s timid, unadventurous style of playing. Some fans will skip straight to ‘Ircan’ because of its chaotic beats, which resemble samples of jazz drumming. Full marks for innovation to Roland Bucher, but on this release he himself seems a bit short of realising its full potential. Available as a vinyl LP. (24/10/2019) Enjoyable voice-and-sample thing by MME Duo. Their awholerunboom (MAKIPHON 006) record is available as two 12-inchers of vinyl, suggesting its intended destination is to lie flat on the coolest turntables in mainland Europe’s most open-minded nightclubs. The team of Patricia Koellges and Tamara Lorenz (who have also worked together as Sculptress Of Sound) construct their beat-based loops using anything they can get their hands on, including percussion, baby synths, objects, and home-made electronics, a bass guitar, and samples of their own voices. If that leads you to expect a song-based groocheroon of some ilk, be aware that the voice samples mostly comprise single words, or short gasps and groans of compacted emotional outbursts, rather than coherent statements rich in lyrical content. The hallmark of awholerunboom is its pared-down, economical, and endearingly ramshackle sound, for which we award MME Duo the “golden matchbox” of 2019, which any travelling musician uses to pack their clothes. More than once the record seemed to be rotating little wooden cogs propelled by rubber bands. Very likeable, but I also find the MME-sters sometimes don’t know when to quit, and their beats (which are plonked down squarely on the on-beat without the least sense of syncopation) just clonk along for three times as long as needed, without really advancing us from one end of the tarpaulin to the other. The record is themed on the four seasons – each side proposing its take on a different time of year – yet stays in much the same mode and mood all the way through. (24/10/2019)