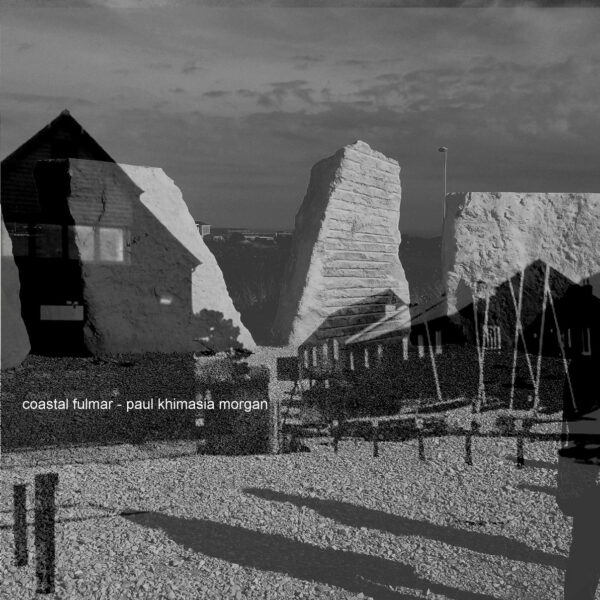 Our fave UK team of Brighton jazz and improv geniuses Daniel Spicer and Paul Khimasia Morgan have made a split record. It’s a lathe-cut single of which only 20 copies exist. We last heard them doing their reduced improv thing on the SU:V22 record. That was just over 20 minutes long, indicating their preference for brevity and concision, which can only be a good thing. On Spicer’s side, we have ‘Hazeblaze’, a poem recited by Spicer using his mouth-like lips and accompanied by Ron Caines, another Brighton-based player and a music veteran to boot, blowing his sax. Spicer is also playing percussion. Need I point out that this “mode” is pretty much the standard “beatnik in the café” set-up which is rumoured to have existed in the 1950s in New York (and perhaps San Francisco) in the wake of Jack Kerouac and his jazz infatuation. The clichéd image we all have is a suave, ultra-cool beatnik wearing his beret and shades, declaiming his angry free-form verse to a backdrop of wailing sax and bongo beats. I have no idea if anything like this ever happened in real life. I mention it because the recording of ‘Hazeblaze’ does, very coincidentally, sound like it was made in a cramped café situation with narrow walls hopefully painted with white emulsion paint. I can’t really understand Spicer’s words, but that’s not the point; the way he delivers the recit has an authority and edge of urgency, similar to what I would have expected from our beloved cold-war beats trying to warn us of the imminence of the atom bomb and silver clouds of fallout dust landing on our bowls of Cheerios. The collage cover artwork is very similar to what we saw on Spicer’s solo record Ylvmlvy from 2012; juxtapositions of found graphics, texts, and photos to suggest maximum absurdity and subversive, subliminal messages.

On ‘Coastal Fulmar’, we have Paul going solo with his guitar-body and electronics set-up that he’s made all his own. The guitar body is just that, an emptied-out acoustic guitar with no neck and no strings; the wooden resonating space is all that he wants. He generates feedback tones and uses a looping device for repeats and patterns as needed. Morgan really “owns” this technique, but he doesn’t come off as too glib about it; with each record, including this one, you can really sense the need for continual exploration and experimentation. This extends even to the editing of the piece, which doesn’t really begin or end very well; instead it’s like a four-minute snip from a larger canvas. Besides the understated performance, the eerie tone of this noise is something to savour; alien yet not too distancing, both cold/forlorn and yet somehow warm and comforting. Without making a big fuss about it, Paul Khimasia Morgan is able to reconcile a few of those pesky contradictions that keep tripping us up in our daily lives. I love the cover image too, which looks like it should have been created by a double-exposure in the camera. ghosts and shadows of buildings, and human figures, superimposed over broken bricks walls and a gravelly surface, or perhaps it’s a beach. You can stare into this ambiguous image for some time and find new areas to explore. From 19th September 2019.