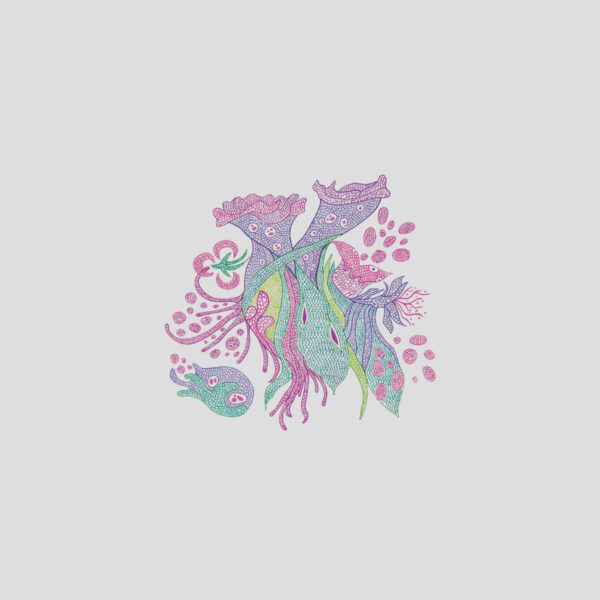 Unusual and charming instrumental record is Laurisilva (THE WORMHOLE WHO#17) by the Italian player Laura Agnusdei, whose saxophone work features heavily on the record, but she’s also an electro-acoustic composer with a classical training and an academic background. She’s joined on some cuts by guest players Elisabeth Lusche (trumpet), reedsman Giacomo Bertocchi, and flautist Thomas Reyna, but I think this is largely a solo affair; her main aim is to draw the listener into her private world, something a lot of musicians claim to do, but Laura Agnusdei specifically wishes to do it by invoking the metaphor of the tree. Hence, Laurisilva which is both a pun on her own name and a reference to a subtropical forest.

The music evokes the sound of tropical plants growing around us, until we’re wrapped in a heat-haze of pleasure, taking care not to tumble into one of those man-eating plants that are the size of a builder’s skip. Agnusdei’s sax work is nothing to be ashamed of, but her real skill is the finesse and grace with which she applies her electronic effects, including looping and delay devices, which are used to create very nuanced results. Sometimes, as on ‘Lungs Dance’ or ‘Epiphyte Blues’, this creates a murky effect which is half-music, half sound-art, where the absence of a tune and very relaxed structure creates a pleasingly abstract mood. Elsewhere, her attempt at sophisticated jazz-tinged pop on ‘Shaky Situation’ falls a bit flat – one too many ingredients in the stew here – but fares slightly better on ‘Jungle Shuffle’, with its amiable syncopated rhythm and semi-humourous musical interjections from woodwinds, trumpet and flutes. The title track, and the closer ‘Golden Kites’, are about the strongest on this short set, the latter not far apart from the dream-hazed LPs of Jon Hassell (one of her named progenitors). And with her use of looping devices on the sax, she can also emerge as an easy-listening version of Terry Riley.

While some of this music may come across as lightweight and unchallenging on first spin, there’s actually a lot of ideas and substance to be had among these musical cloud-forms. Limited edition vinyl with a cover drawing by Laura, from her Organic Life Patterns series. From 24th October 2019.